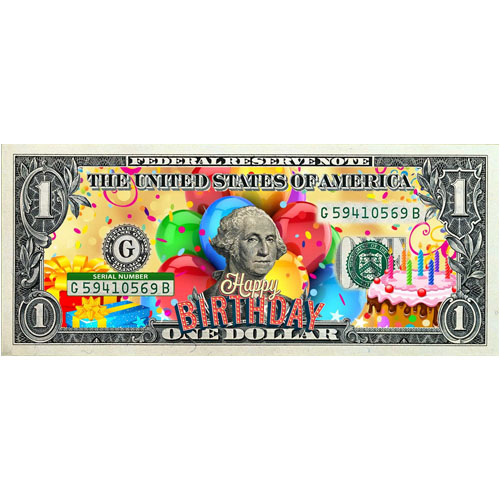 The United States $1 bill is the most common and widely circulated form of Federal Reserve Note in the world. A 2019 estimate put the number of $1 bills in circulation around the world at roughly 12.7 billion notes. The availability of $1 notes and the low value makes them the perfect form of paper currency to enhance for commemorative purposes. Now, $1 Happy Birthday Legal Tender Notes are available to you for purchase online from Silver.com.

The obverse of these $1 Happy Birthday Legal Tender Notes comes with a portrait of President George Washington. Though this effigy is credited with its Federal Reserve Note debut in 1963 on these $1 notes, it was actually first used in 1923 and inspired by the porthole design for individual portraits that had been used as early as the 1890s and early 1900s. this field also includes the colorized enhancements that deliver colorful birthday balloons, confetti, and a birthday cake.

On the reverse of Happy Birthday Legal Tender Notes, you will find the traditional reverse design of the $1 Federal Reserve Note. This visual includes the denomination in the center with the all-seeing eye to the left and the Great Seal of the United States to the right.

These $1 Happy Birthday Legal Tender Notes come with a presentation folio that offers a bi-fold design. You can easily set this note upright on display, enabling you to see both the commemorative obverse design on the right of the folio and the included Certificate of Authenticity on the left.

Silver.com customer service can assist you at 888-989-7223. You can also contact us online using our live chat and email address features.