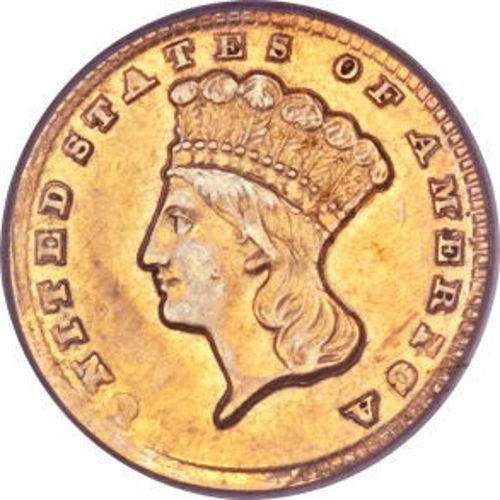 When the federal government tried to combat the Great Depression, one of its biggest efforts included the collection and melting of all gold coins in circulation. Starting in 1933, all gold coins struck and distributed in the US were collected and melted into gold bars. Today, the Pre-33 $1 Indian Gold Dollar available in this Silver.com listing are among the rarest in US history.

As the federal government struggled to stabilize the economy and its own finances during the Great Depression, President Franklin Roosevelt issued an Executive Order to collect and melt all gold coins in circulation. With just a few Pre-1933 coins surviving, the value of these $1 Indian Gold Dollars is both monetary and historical.

As part of the Type 3 production series, these Pre-33 $1 Indian Gold Dollars were struck from 1856 to 1889. Original coins in the $1 gold series featured different dimensions and Lady Liberty’s image on the reverse. These coins bear the image of a Native American chieftain with a feathered headdress on the reverse. The obverse features the coin’s face value and year of minting, encircled by a wreath of leaves.

Each coin available in this product listing is in Almost Uncirculated condition. AU coins show only slight signs of wear, maintain some signs of their original luster, and are often graded between 50 and 58 on the Sheldon scale.

The United States Mint struck its $1 gold coins between 1849 and 1889 at various mints, including Philadelphia, Dahlonega, Charlotte, New Orleans, Denver, and San Francisco. If you have any questions for a Silver.com associate, feel free to reach out via phone at 888-989-7223, online using our live web chat, or by sending us an email. For similar products, check out the other coins on the Pre-1933 Gold Coins page of Silver.com.