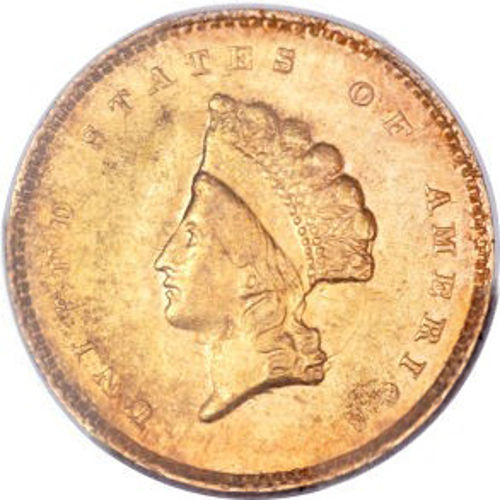 The rarest coins in US history are those gold coins struck before 1933. Following a government roundup of gold coins, the vast majority of Pre-1933 coins disappeared from circulation. Today, Silver.com proudly offers our customers the chance to purchase a Pre-33 $1 Indian Gold Dollar.

During the 19th century, the United States Mint produced the majority of its coinage in silver. However, the discovery of gold in the Carolinas and Georgia during the 1830s paved the way for gold coins. The California Gold Rush of 1849 kicked down the doors of the US Mint, as gold poured into the Mint’s coffers.

The Pre-33 $1 Indian Gold Dollar is the smallest coin ever struck by the United States Mint. The coins in this product listing are part of the $1 US Gold Coin program that was introduced in 1849 and struck until 1889. When the coins were originally introduced, Lady Liberty was featured on the reverse. On these Type 3 coins, an Indian Head figure was featured on the reverse.

These $1 Indian Gold Dollars were struck by the Mint from 1856 to 1889 and were, by far, the most common gold dollars in the series. Type 3 identifies these coins as the third iteration in the series. The condition, Very Fine (VF), is reserved for coins with light to medium signs of wear. All major features retain sharp detail though, and some of the luster remains.

On the reverse side of each coin is the left-profile bust of a Native American with a feathered crown. The lone engraving is “United States of America.” On the obverse, a wreath of leaves surrounds the face value and year of minting on the coins.

These coins were struck at a variety of United States Mint facilities, ranging from San Francisco and Denver in the West to Philadelphia and Charlotte on the East Coast. If you have questions for Silver.com, our associates can answer those inquiries. You can reach us at 888-989-7223, online through our live chat, and via email.