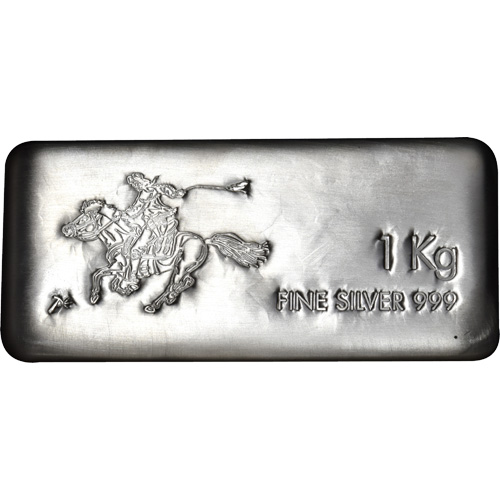 Any quantity available for $3.27 per oz over spot!

For 18 months from April 1860 to October 1861, the heartiest riders from the American West powered the connection between the new American territories and states of the West as far as California to the East Coast cities of Philadelphia, New York, Boston, Washington D.C., and others. Known as the Pony Express, these men rode hard day and night to move mail and other packages between California and Missouri. SilverTowne has an exciting new series of cast silver bars with a design inspired by the spirit of Pony Express riders. Right now, 1 Kilo Silver SilverTowne Pony Bars are available to purchase online at Silver.com.

Each of the 1 Kilo Silver SilverTowne Pony Bars listed here is brand-new options available from SilverTowne. The series includes a 100 Troy ounce silver bar alongside these One Kilogram silver bars, with both bars sharing the same obverse design. The bars in the 1 Kilo Silver Pony Bar release come with boxes for individual silver bars and Master Boxes for multiples of 15 silver bars.

The Pony Express was a service developed and launched in April 1860 to connect California and what was then the American frontier in Missouri. Prior to the founding of this horse-mounted means of delivering mail, messages, and newspapers from East to West and vice-versa, it took weeks or months to move information between California and the East. The launch of the Pony Express cut that time down to just 10 days.

On the obverse side of 1 Kilo SilverTowne Pony Bars is a depiction of a rider of the Pony Express. Taking up most of the left side of the design field, a rider is moving at top speed upon his mount as he races from one station to the next on the Pony Express. In all, the Pony Express followed a 1,900-mile route along the Oregon Trail and California Trail to Wyoming, through Salt Lake City, Utah, and on to the east. To connect the system and ensure riders and horses could withstand the journey, 186 stations were established roughly 10 miles apart along the route.

The reverse face of the 1 Kilo SilverTowne Pony Bars is blank. No designs or inscriptions have been struck onto this face of the bars. That does not mean there are no visuals present on this side. Cast silver bars are produced by melting silver shot down and pouring it into graphite molds for cooling and stamping. The result of the cooling and settling of the silver during this process can result in different striations, lines, and textures forming on this side of the bar.

If you have any questions when you buy silver bars, please don’t hesitate to ask. Silver.com customer service is available at 888-989-7223, online using our live chat, and via our email address.