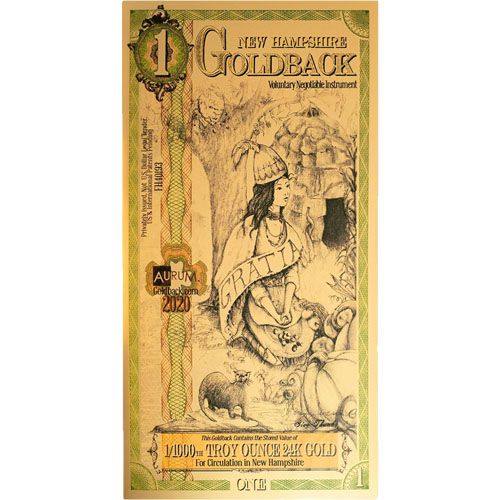 Goldback Gold Notes were first issued as a form of voluntary currency for use in the state of Utah. The gold notes have varying weights of 24-karat gold that range from these 1/1000th Troy ounce notes at the smallest to 1/20 Troy ounce at the largest, making each one not only an affordable option for gold buyers, but also an easily exchanged form of gold for commercial transactions.

New Hampshire is a fitting state to issue a series of Goldback Gold Notes. The fifth-smallest state in the US by area and the 10th-least populous state, New Hampshire was also the first to shake off the government of Great Britain in January 1776, establishing its own independent government to control its own destiny.

On the obverse of each New Hampshire Goldback is a depiction of the allegory known as Gratia. One of the three Charities, Gratia is representative of favor. She is one of the many goddesses from Greek mythology representing charm, beauty, nature, and human creativity, among other facets such as goodwill and fertility. The image of Gratia captures a female figure seated near a tree with a pumpkin nearby and an indigenous home behind her. Gratia wears the indigenous clothing of the local tribes.

The reverse side of 1 New Hampshire Goldback Gold Notes comes with a blank field. While no separate design has purposely been produced on this face of the gold notes, you will see a mirror image of the obverse design. However, the design is not colorized or enhanced in any way like the obverse image.

Please feel free to contact Silver.com if you have any questions. Our customer service team is available at 888-989-7223, online through our live chat, and via our email address.