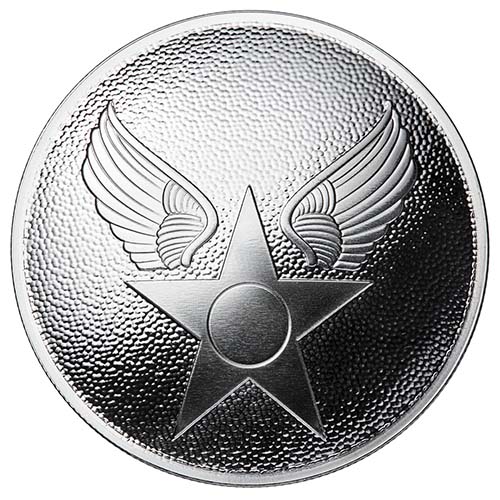 Today, the US Air Force has 318,415 active duty personnel, 69,200 reserve personnel, and 105,700 Air National Guard personnel. The air fleet of the US Air Force consists of more than 5,369 military aircraft, and the service is also responsible for the management and use of 406 ICBMs and 170 military satellites.

All 1 oz Silver Air Force Button Domed Rounds have a beautiful convex striking that provides a curved surface to the design field. These rounds ship to you inside of protective plastic capsules, with each round coming with its own, individually numbered Certificate of Authenticity.

On the obverse of all 1 oz Silver Air Force Button Domed Rounds you’ll find a design based upon the uniform button of Air Force personnel. It includes a pair of open wings that have a star emanating from the center. The simplest design in the collection, the background is dominated by a large star with a circle in the center, one of the original insignia of the US Army Air Forces.

The reverse of all silver rounds in this collection include the Great Seal of the United States. It depicts the American bald eagle as it holds the national shield, and clutches an olive branch and arrows. The olive branch symbolizes the nation’s desire for peace, while the arrows represent its readiness to move to war in defense of its freedom.

Please feel free to reach out to Silver.com when you have questions. Our customer service team is available at 888-989-7223, online through our live chat, and through our email address as well.