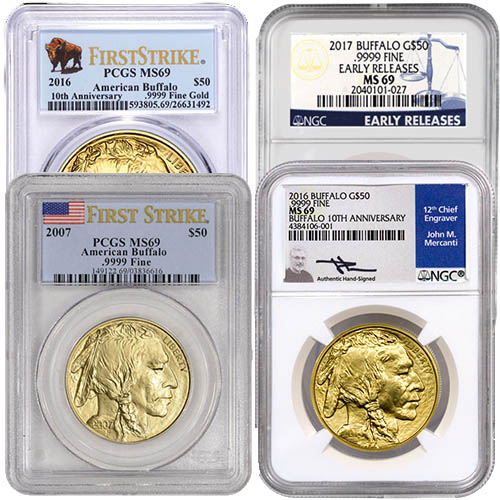 Among the variety of bullion coins struck by the United States Mint each year, the Gold American Buffalo coin is a unique product. Available in bullion and proof like other counterparts, the Gold Buffalo is the only annual-release coin that features 24-karat .9999 fine gold content. The 1 oz Gold American Buffalo Coin is available to you online today at Silver.com with NGC or PCGS certification!

Gold American Buffalo coins were introduced by the United States Mint in 2006 with a bullion and proof option. While the bullion coins have only ever been available in 1 oz gold, the original hope was to offer the Proof Gold Buffalo in fractional weights similar to the Gold Eagle. However, only in 2008 were fractional weights produced in ½ oz, ¼ oz, and 1/10 oz options.

Today, the Gold American Buffalo coin enjoys the same annual-release bullion status as the Silver Eagle and Gold Eagle, cementing its place in the US Mint’s lineup of bullion coinage. Like other offerings from the US Mint, the Gold Buffalo has seen its mintage ebb and flow. The initial release year of 2006 remains the highest at 337,012. Sales fell in 2007 and 2008, rebounded upward from 2009 to 2011, and have bounced back and forth since. The 2005 and 2016 releases had two of the highest back-to-back mintages in the program at 220,500 and 219,500 (respectively).

On the obverse of all 1 oz Gold American Buffalo Coins is the right-profile portrait of a Native American tribal leader. The reverse includes the depiction of a buffalo based upon Black Diamond, a resident of the Central Park Zoo.

All 1 oz Gold American Buffalo Coins in this listing are Mint State 69 coins from the NGC or PCGS. Near-perfect specimens, they have full, original mint luster with a maximum of two minor detracting flaws. The coins are available from varied years of issue, with varied labels such as First Strike or Early Release included.

Silver.com does not guarantee the year of issue or included label on your 1 oz Gold American Buffalo. These coins are chosen from available selection in the warehouse when your order is prepared for shipment. We encourage you to contact us on the phone at 888-989-7223 with questions. You can also reach out to us online using our live chat and email.