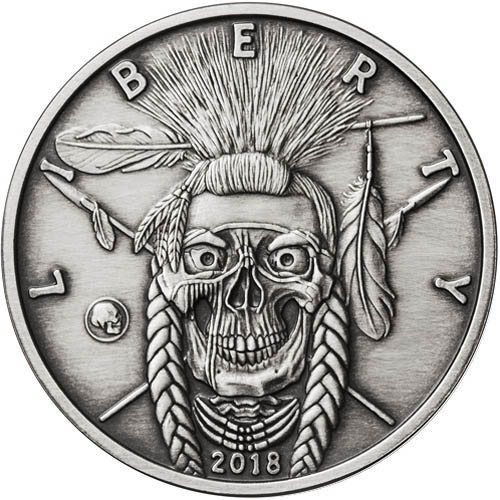 There are a lot of myths associated with the Wild West, such as the idea of damsels in distress always saved at the last moment by a gunslinger with a heart. The reality of the West was a ruthless one in which the law was always fighting from behind to keep robbers and outlaws in check as the US Army fought indigenous tribes to secure routes from East to West. The 1 oz Antique Silver American Western Skulls Indian Warrior Round is currently available to you for purchase online at Silver.com.

Long before European and American settlers began moving from the established states and cities of the East Coast, the Western United States was inhabited by millions of indigenous tribes. By the 19th century, their numbers had dwindled through inter-tribal warfare and interactions with outsiders, such as military conflict with the US Army and decimation by foreign diseases.

The brave men who fought to defend the homelands of these indigenous tribes were referred to as braves or warriors. Peaceful individuals who hunted or tended a farm to support the tribe prior to the arrival of outsiders would eventually take up arms to defend against encroaching settlers, outlaws, and the US Army. The Indian Warrior is the latest design in the American Western Skulls Collection.

On the obverse of 1 oz Antique Silver American Western Skulls Indian Warrior Rounds, you’ll find the image of a frightful warrior. You can see the lines of his war paint, an arrow through his hair, and a set of crossed spears behind his skull.

The reverse side of 1 oz Silver American Western Skulls Indian Warrior Rounds includes the fried eagle design. This common reverse artwork in the series is a deadly riff on the heraldic eagle of the United States. Rather than an alive, healthy American bald eagle, this bird is “fried” and lacks all feathers.

These 1 oz Antique Silver American Western Skulls Indian Warrior Rounds ship with a protective plastic capsule and an included Certificate of Authenticity. The COA offers a matching serial number to that which is engraved onto the edge of each individual silver round. These antique rounds have a unique polish that gives them an aged look.

We encourage Silver.com customers to call us with questions at 888-989-7223. You can also connect with us live online through our chat service or send us an email at any time.