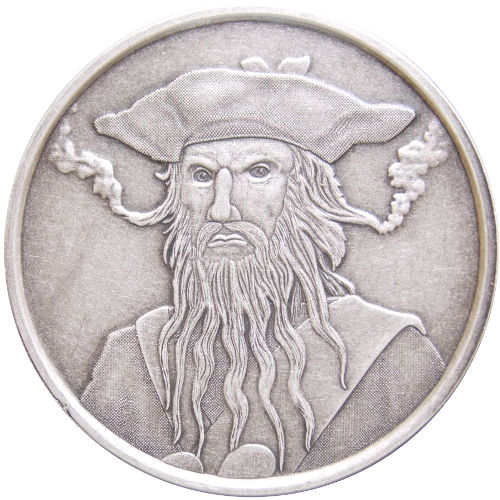 There was perhaps no pirate of the Caribbean that was more feared than Edward Teach, though you likely know him simply by the name Blackbeard. The all-new silver rounds from Anonymous Mint celebrate the legacy and fear of Blackbeard with a brilliant unique finish. Right now, the 1 oz Silver Antique Blackbeard Round is available on Silver.com.

Each of these 1 oz Silver Antique Blackbeard Rounds is available with edge-lettered serial numbers that identify the round’s position in the striking process. For example, you’ll notice a number such as 350, signifying the round is 350 out of the 3,000 rounds struck.

Additionally, the rounds feature an antique finish that adds a unique luster to the visualization of the round. Antique finishes include warm, subtle depth that builds on the inherent beauty of each round’s design.

Edward Teach came to the Caribbean as a member of the British Royal Navy, but his life would come to an end nearly a decade later as one of the world’s most infamous pirates. Originally stationed on the HMS Endeavor, he would capture a French sloop in 1717 that he converted into the Queen Anne’s Revenge, outfitting it with more than 40 cannons and striking the fear of merchants and naval units alike.

On the obverse of the 1 oz Silver Antique Blackbeard Round is the image of Blackbeard himself, captured with the famous fuses he would light and stick under his hat or weave into his beard to light during battle and terrify his enemies.

The reverse side of the Blackbeard Round bears a replica image of his flag from the Queen Anne’s Revenge. The flag from his ship is said to have convinced more than one ship to surrender at its mere sight. It included the image of a skeleton toasting a drink to the devil and stabbing a heart with a large sword.

Each of these 1 oz Silver Antique Blackbeard Rounds is the result of the hard work of coin creator Julie Lindquist, who developed the program in conjunction with the Anonymous Mint, one of America’s many private minting facilities.

If you have any questions, please don’t hesitate to reach out to Silver.com. Our customer service team members are available on the phone at 888-989-7223, online using our live web chat, and via our email address.