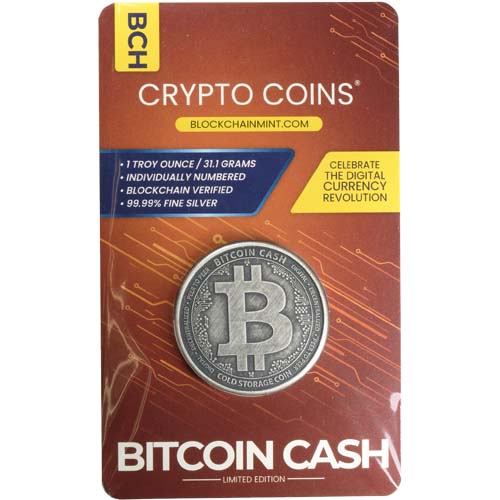 The number of crypto currencies available today continues to grow as the popularity of the concept of virtual currencies gains steam. Unlike other forms of currency, you can never hold Bitcoin or Bitcoin Cash in your hands, but that doesn’t mean you can’t have a replica of it to hold. You can buy silver in the Crypto Commemorative design release from Hotco as a physical representation of these virtual forms of currency. Today, 1 oz Silver Antique Crypto Commemorative Bitcoin Cash Rounds are available to you online at Silver.com.

Bitcoin Cash is often referred to as Bcash and, as the name suggest, resulted from a split in the blockchain of Bitcoin. This occurred in the summer of 2017 when a group of Bitcoin activities, investors, and developers teamed up with China-based currency miners to block a proposed increase in the blocksize of Bitcoin. The resulting split eventually created Bitcoin Cash in August 2017.

All of the 1 oz Silver Antique Crypto Commemorative Bitcoin Cash Rounds available to you at Silver.com come with individual protective plastic capsules. The silver rounds for sale in this collection have individual serial numbers and come with a Certificate of Authenticity. As the antique version of this release, these rounds have a brushed, matte appearance.

On the obverse side of 1 oz Silver Antique Crypto Commemorative Bitcoin Cash Rounds is a design featuring the logo of Bitcoin Cash. As a split from Bitcoin, Bcash uses the same symbol as Bitcoin. However, the background design elements on this side are different from the standard Bitcoin release in Hotco’s collection.

Bitcoin Cash split from Bitcoin in August 2017. This was done using a hard fork. Generally speaking, a fork is used to describe a blockchain that diverges into two potential paths going forward. It is also considered a change in protocol that results in a rule change. In the case of Bitcoin and Bitcoin Cash, the hard fork brought about changes in software validating that saw blocks produced under the new rules as invalid under the old rules.

The reverse face of 1 oz Silver Antique Crypto Commemorative Bitcoin Cash Rounds includes the common design element of the collection. This design is meant to reflect the physical network structure and computer coding processes that support blockchain technology and the virtual wallet existence of crypto currencies.

Please feel free to reach out to Silver.com with your questions. You can call us at 888-989-7223, chat with us live online, or simply email us.