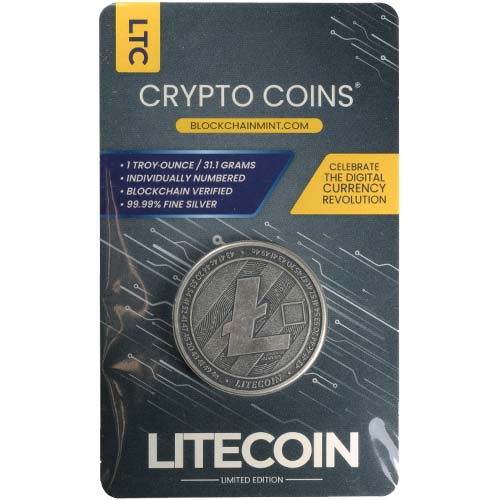 The first altcoin, those coins which represented a spinoff of Bitcoin, to be introduced was Litecoin. Conceived within two years of the release of Bitcoin, Litecoin was released to the public in October 2011 by a Google employee and former Engineering Director at Coinbase. A Litecoin design is represented in the Crypto Commemorative collection from Heads or Tales Coins and Collectibles. Now, the 1 oz Silver Antique Crypto Commemorative Litecoin Round is available to you for purchase online at Silver.com.

Litecoin was released by Charlie Lee, the Google employee behind its development using an open-source client on GitHub. The network for Litecoin went live on October 13, 2011, and utilized a fork from the Bitcoin Core client. The primary difference between Litecoin and Bitcoin is the decreased block generation time for Litecoin.

Block generation timing for Litecoin takes 2.5 minutes, compared to 10 minutes for Bitcoin. The idea was to make Litecoin faster for transaction processing. That was proven successful in May 2017 when the first Lightning Network payment completed with Litecoin transferred .00000001 LTC was transferred to Zurich to San Francisco in under one second.

On the obverse side of the 1 oz Silver Antique Crypto Commemorative Litecoin Round is the image of the currency’s symbol. Litecoin uses the capital letter “L” with an angled-horizontal line struck through the vertical arm of the “L” as its official symbol. For trading purposes, Litecoin is referred to by the shortcode of LTC.

The reverse face of all the silver rounds in the Crypto Commemorative collection from Hotco share the same design element. You’ll find this networking-themed design on Bitcoin, Bitcoin Cash, and Ethereum releases as well.

These 1 oz Silver Antique Crypto Commemorative Litecoin Rounds are available with protective plastic capsules and accompanied by a Certificate of Authenticity. The antique finish delivers a brushed, matte appearance to the rounds.

We encourage Silver.com customers to call us at 888-989-7223 if they have questions about silver for sale. You can also connect with us online through our live chat and email address features.