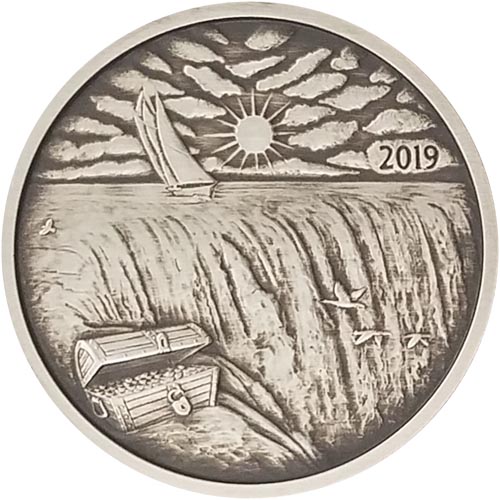 The silver rounds for sale in the Finding Silverbug Island Series feature unique designs offered only for a limited time. The designs come with a date mark and are offered in bullion, proof-like, and antique options. The latest design in the collection goes back thousands of years to showcase a time when humanity believed the Earth to be flat and sailing near its edge to be a death sentence for the unskilled sailor. Now, 1 oz Antique Silver Ends of the Earth Silverbug Island Rounds are available to purchase online at Silver.com.

For thousands of years, humanity believed that the landmasses of Earth were simply floating on water on a disc. At the edge of this disc, the waters of the ocean simply crashed off into oblivion never to be seen again. Stray too close to the edge of the world in a ship and you were certain to be met with death and destruction.

Though the modern world has shown the Earth to be spherical with no doom waiting at its edges, scores of ancient sailors feared exploring too far around the globe. There were those explorers, however, willing to push the bounds of humanity’s knowledge in order to continue exploring in the name of advancing mankind’s knowledge of the world.

The obverse face of the 1 oz Antique Silver Ends of the Earth Silverbug Island Rounds offers a view of what some believed the edge of the world would like. An otherwise peaceful day, the sailboat in the design enjoys the calm waters as the sun shines bright on a partly-cloudy day. As it sails along, one can’t help but wonder if the sailors aboard the ship know that parallel to them is certain doom as the waters of the ocean crash off the edges of the planet.

On the reverse field, the 1 oz Antique Silver Ends of the Earth Silverbug Island Rounds have the common design element for the entire collection. In the middle of the ocean, an island made entirely of silver coins rises from the depths. Like a siren song to those seeking wealth, wooden sailing vessels can be seen approaching. The ship in the distance has no doubt seen the fate of those who got too close and may be deciding a visit is not worthwhile.

These 1 oz Antique Silver Ends of the Earth Silverbug Island Rounds are available with protective plastic flips and an antique polish. This polish creates a brushed, matte visual appeal reminiscent of ancient coins.

Silver.com customer service is available to you at 888-989-7223. You can also chat with us live online or simply send us an email with your inquiries.