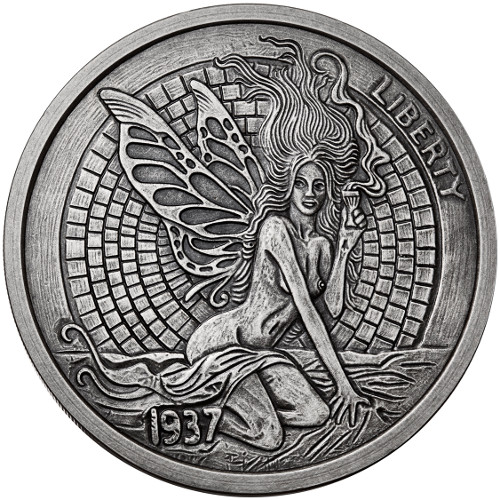 The Silver Hobo Nickel Round series from Paolo Curcio and Osborne Precious Metals has brought historic cultural art from 19th and 20th century America to life again on the obverse and reverse sides of silver rounds. Right now, the 1 oz Antique Silver Hobo Nickel Green Fairy and Fishbones Round is available online at Silver.com.

In 19th and early 20th century America, the hobo population of the country drifted from place to place in search of work, often living with their worldly possessions in a small sack slung over their shoulder. One of the primary marks these individuals left on the world came on the face of American currency.

Hobos would etch markings into circulation currency, altering the images in ways that Americans found popular. Famed artist and engraver, Mr. The, has created five new designs for the Silver Hobo Nickel Series in partnerships with Osborne Precious Metals.

For the fourth release in the series, Mr. The has diverged from the traditional designs in this series. The 1 oz. Antique Silver Hobo Nickel Green Fairy and Fishbones Round has the image of a Green Fairy on the obverse. She is depicted kneeling with a strap of cloth across her lap and a steaming, intoxicating beverage in her hand.

The reverse of the Green Fairy and Fishbones Silver Rounds features the image of a skeletal body of a fish as it swims in its deep-sea environment. There are no notable features on these rounds from the original Buffalo Nickels, a primary inspiration for the design field of the previous three releases.

Each 1 oz Antique Silver Hobo Nickel Green Fairy and Fishbones Round ships to you in a plastic capsule to protect its condition. There is edge lettering on each individual round with a unique serial number in the series of 1,000 rounds release. An individual Certificate of Authenticity is also included in this release.

Osborne Precious Metals is the production partner for the Hobo Nickels. Osborne traces its roots to 1830s America, and is the oldest private mint in the company. It is just the second oldest refinery in the United States behind the sovereign US Mint.

If you have any questions, please don’t hesitate to reach out to Silver.com. Our customer service associates are available at 888-989-7223, online through our live chat, and via our email address.