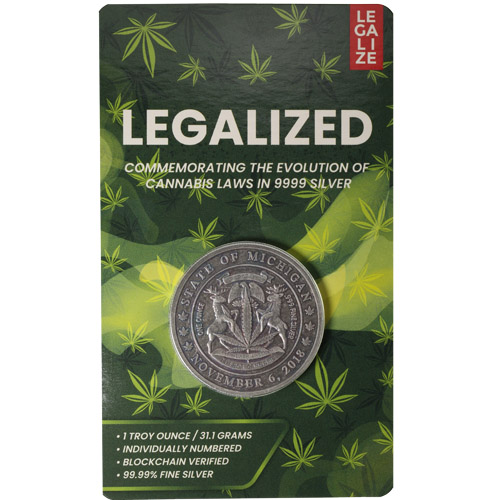 As the calendar shifts from 2019 to 2020, the United States will gain two more states in the movement to legalize recreational marijuana use. The latest states to continue on this path are Illinois and Michigan, both of which have recently passed legislation making it legal for Americans in those states to own and use marijuana on a recreational basis. Now, 1 oz Antique Silver Legalized Collection Michigan Rounds are available to you for purchase online at Silver.com.

Michigan and Illinois became the 10th and 11th states in the US to legalize recreational marijuana, doing so through the ballot box during the 2018 midterm election cycle. With the passage of the Michigan Regulation and Taxation of Marihuana Act, the state made it legal for residents to own up to 2.5 ounces of cannabis on hand with an allowance for 10 ounces in the home.

Michigan opened its public dispensaries in December 2019 for legal sales of recreational weed. The measure passed with 56% approval from voters, making Michigan’s initiative the second most popular among voters behind the 57% approval rating California voters gave similar legislation in their states.

On the obverse of 1 oz Antique Silver Legalized Collection Michigan Rounds is the image of the state seal of Michigan. In honor of this series and the passage of legalized marijuana in the state, the seal has been modified with elements nodding to legal cannabis in the state.

The reverse face of Antique Silver Legalized Collection Michigan Rounds comes with the design of a cannabis leaf in the center. This leaf has small cannabis leaf hands that are cuffed in front of it as a symbol of the federal government’s continued pursuit of its War on Drugs and the illegal status of cannabis for recreational purposes.

These 1 oz Antique Silver Legalized Collection Michigan Rounds are available with individual blisterproof card packs that include Certificate of Authenticity information on the card. Each one has an antique polish that creates an heirloom appeal to the silver round itself.