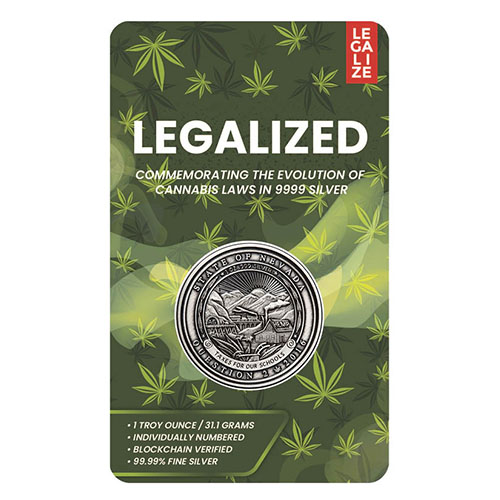 During the 2016 election cycle in the United States, voters in four different states had the chance to buck the laws of the federal government and legalize recreational cannabis use within their home states. In all four states, the ballot measures passed and doubled the number of states that allowed for recreational use. One of those states in 2016 was Nevada. Now, 1 oz Silver Antique Legalized Collection Nevada Rounds are available to you for purchase online at Silver.com.

In 2016, Nevada voters joined those in California, Massachusetts, and Maine in passing legislation to legalize the use of cannabis for recreational purposes. This opened the sale of cannabis and its byproducts to the residents of each state over the age of 21. Nevada had a specific purpose in mind with its newly legalized cannabis.

Nevada’s Question 2 on the ballot in 2016 was designed to direct state tax revenue from the legal sale of cannabis to funding public education initiatives in the state. In the first four days alone, legal cannabis sales in Nevada generated $3 million in revenue with a tax impact of an additional $500,000 for the state government.

On the reverse side of the 1 oz Silver Antique Legalized Collection Nevada Round is an image of the state seal of Nevada. While all of the original elements remain, the silver miner’s cart headed to the supply building has been replaced with a hemp grower bringing his crop to the barn instead.

Nevada’s legal cannabis sales have been among the most effective in the nation. Since the passage of Question 2, the first seven months generated 7,000 new jobs in the state and created $19 million in revenue, a good portion of which was collected by the state government in the form of taxes.

The obverse side of 1 oz Silver Antique Legalized Collection Nevada Rounds includes the design of a cannabis leaf. This singular leaf has fists that are cuffed and bound by chains, with an outer design rim element that also includes a chain.

These 1 oz Silver Antique Legalized Collection Nevada Rounds are available to you inside of protective blister cards that include certificate information. Each antique silver round here has a polish applied that creates a brushed, matte finish for the rounds.

We encourage Silver.com customers to call us with questions at 888-989-7223. You can also chat with us live online or simply send us an email with your inquiries.