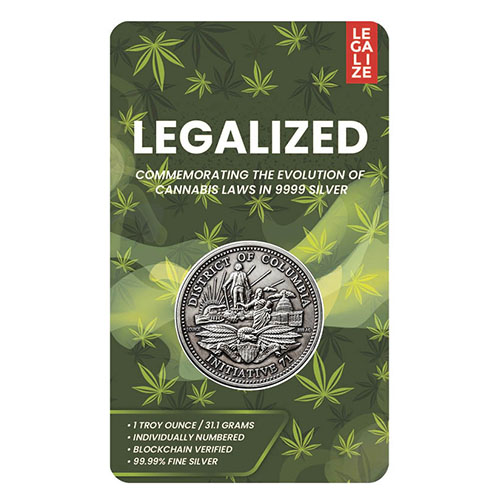 The movement to legalize recreational cannabis in the United States started in Colorado and Washington in 2012. In the following election cycle in 2014, Oregon and Alaska joined the movement with ballot measures. In the same year, Washington DC put an initiative in front of its residents to vote on legalization, passing Initiative 71. Today, 1 oz Silver Antique Legalized Collection Washington DC Rounds are available to you online at Silver.com.

Because Washington DC is not a state, the movement to legalize the recreational use of cannabis in the district has been consistently blocked by the federal government. Though voters passed Initiative 71 in 2014 during the midterm elections, the federal government has blocked implementation of legal sales time and again in the federal district.

On the reverse side of 1 oz Silver Antique Legalized Collection Washington DC Rounds is the seal of the District of Columbia. Designed by and named for President George Washington, the first elected President of the United States, the district is not a state, but rather a federal district. This seal includes George Washington’s statue on a pedestal as a female figure in the foreground clutches the scales of justice with cannabis on one end.

The obverse face of 1 oz Silver Antique Legalized Collection Washington DC Rounds features the common design element in the series. This singular cannabis leaf is surrounded by a chain border design with fists cuffed in chains.

Washington DC was to allow for legal recreational cannabis sales starting in February 2015, but that has been delayed time and again by the federal government. Using spending bills in Congress as a potential punishment for DC, legal sales have not started yet in the district.