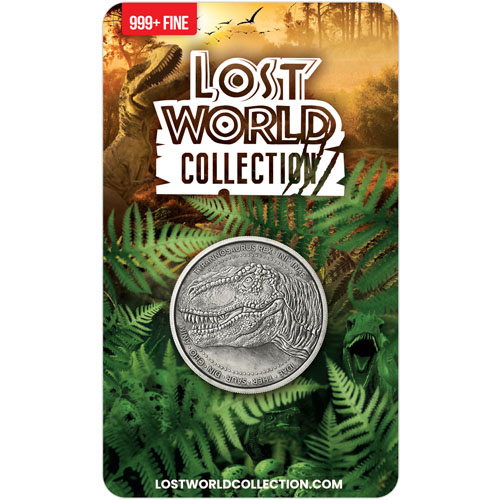 The prehistoric world was a place unlike anything the modern human mind can likely imagine. Lush tropical jungles where there are now deserts. Continents arranged in patterns that don’t match the globe we know today. Perhaps most mind-boggling, the massive dinosaurs roaming the planet. The Lost World Collection offers a visual of some of the most famous dinosaurs discovered, in fossil form of course, by modern humans. Now, 1 oz Antique Silver The Lost World Collection T-Rex Rounds are available to you for purchase online from Silver.com.

Part of the genus of large theropod dinosaurs, the T-Rex is one of the most well-known dinosaurs because of its prominence in fossil records. Flashback to between 68 and 66 million years ago, and the Tyrannosaurus rex was roaming the planet on an island continent that scientists have dubbed Laramidia.

This island continent was around during the Late Cretaceous period of Earth’s history and developed during the split of the North American continent. Over the course of time, Laramidia formed as the Western Interior Seaway split Appalachia from the former. It was on this lush continent that T-Rex roamed the land. Compared to other tyrannosaurids, the T-Rex had the widest habitat range and was the last known member of the species to live prior to the Cretaceous-Paleogene extinction event.

On the obverse of the Antique Silver The Lost World Collection T-Rex Rounds, you will find the head of the powerful and mighty Tyrannosaurus rex. The head of the beast is captured in left-profile relief and shows off one of its most prominent features, a massive jaw with a row of razor-sharp teeth that would make a Great White Shark blush.

The reverse side of 1 oz Antique Silver T-Rex Rounds comes with a common design element for the series. This detailed field features the name of the series in a unique script at the center, complete with a claw swipe through the words. There is a dinosaur footprint at the bottom, along with the identifying hallmarks of the round and a beaded border.

These 1 oz Antique Silver The Lost World Collection T-Rex Rounds are available inside protective blistercards. The blistercards offer a themed front design with details of the prehistoric world on the back. Details on this release are secured on the BEVIS blockchain and accessible through the QR code on the back of the card.

Silver.com customer service is available at 888-989-7223. Alternatively, you can chat with us live online or email us directly when you have questions about silver for sale.