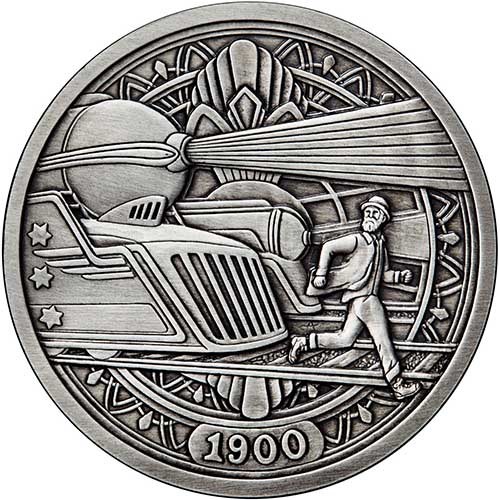 For 2017, the Hobo Nickel Series is departing from the popular themes and design concepts of the 2016 issue for these popular silver collectibles. There are five brand-new designs available to collectors of silver rounds in the 2017 issue, each with an incredibly unique appeal that is sure to catch your eye. Today, 1 oz Antique Silver The Trains Rounds are available to you online at Silver.com.

Each release in the 2017 Hobo Nickel Series is unique in that it offers a starkly different take on hobo artwork and culture. While the original series in 2016 offered similar, yet different, takes on the famous Buffalo Nickel’s design from James Earle Fraser, the artists behind the 2017 collection have followed their own path with amazing results.

The 1 oz Antique Silver The Trains Round marks the third release in the 2017 issue of the rounds, following the Durer’s Knight design and the Fisherman & Graveyard Shift design. Another factor setting the 2016 and 2017 issues apart are the artists themselves. While the famed Mr. The created all five designs in 2016, five different artists are working on the 2017 issues.

Steve Adams steps into the limelight for the issue of The Trains Round. His creation brings bits and pieces of design elements from 2016 Hobo Nickels into the 2017 issue. Specifically, the use of trains in the design theme of this third release of the year.

On the obverse of the round you’ll find tracks that appear suspended in air. In the background one train can be seen steaming along a set of tracks, while the foreground has another set of tracks with a man running along them as a steam locomotive powers along the tracks hot on his trail. A lone engraving of “1900” is featured along the bottom.

The reverse of the 1 oz Antique Silver The Trains Round includes the image of two locomotives facing each other head on using their lamps to shed light on a human figure that is on one knee as it holds up a silver round design. This small round features a bearded man in right-profile relief, similar to the Native American on the original Buffalo Nickel.

Please don’t hesitate to contact Silver.com with questions. You can reach out to us at 888-989-7223, chat with us live online, or simply send us an email. Don’t forget you can check the spot price of silver on our website at any time!