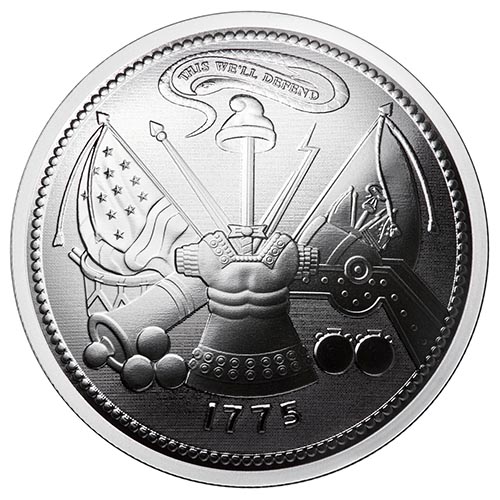 On that June day in 1775, the Continental Congress formed the Continental Army as a unified army representing the original 13 colonies to fight back against Great Britain, with George Washington appointed as the Commander in Chief of that young, green fighting force. Though the Continental Army was officially disbanded following the war, the modern US Army traces its roots to this first American army.

The United States Armed Forces Series of silver rounds honors the five branches of Armed Service in the US Military. These include a convex, domed round for each of those services with unique regalia used as the obverse design in each release. The branches represented include the US Army, US Navy, US Coast Guard, US Marine Corps, and the US Air Force.

On the obverse of the 1 oz Silver Army Button Domed Round you’ll find perhaps the most complex design in the series. Based upon the image of the Department of the Army’s emblem, it includes a chest plate armor in the center with three armaments rising up from the center; a half-pike to the left, sword with liberty cap in the center, and a fixed-bayonet musket to the right. The Army motto “This We’ll Defend” is upon a ribbon scroll above.

The reverse of all rounds in the United States Armed Forces collection includes the design of the Great Seal of the United States. Used on government documents, passports, and even the one dollar bill (since 1935), it features the American bald eagle behind the national shield, with arrows in one talon and an olive branch in the other.

Your 1 oz Silver Army Button Domed Round ships inside of a protective plastic capsule, and each product arrives with its own individually numbered Certificate of Authenticity.

We encourage Silver.com customers to contact us with questions. You can call us at 888-989-7223, chat with us live online, or simply send us an email with your inquiries.