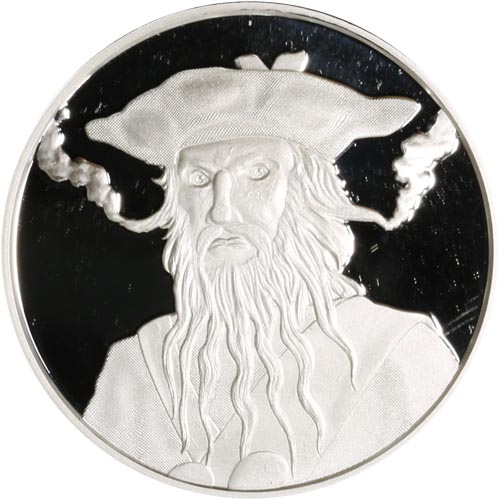 The Anonymous Mint is famed for its creation of low-mintage, beautifully designed silver rounds. Each one offers a design created by the artists in-house at the mint and features beautiful finishes such as proof and antique options. Now, 1 oz Silver Blackbeard Rounds are available to you for purchase online at Silver.com.

Though not much is known about the life of Edward Teach, better known as Blackbeard, one thing is clear, he lived his life on the sea from start to finish. He is believed to have been born in 1680 in Bristol, England, then one of the busiest ports in the British Empire. Teach is said to have served as a sailor in the Royal Navy during Queen Anne’s War, as it was known in the Americas.

After serving in the Caribbean theater of the war on a privateer ship, he settled in New Providence in the Bahamas. He joined the crew of pirate captain Benjamin Hornigold in 1716 before eventually capturing his own vessel to serve as his flagship. Blackbeard captained the Queen Anne’s Revenge, a 200-ton ship that he enhanced with 40 large guns and crewed with 300 pirates under his command.

On the obverse side of 1 oz Silver Blackbeard Rounds is a portrait of Blackbeard in front-facing relief. The depiction shows him wearing an oft-featured hat on his head from historic paintings of the pirate. His long, thick beard is featured as well with lit, smoking fuses protruding from under his hat. Blackbeard was known for his lack of violence in many encounters with ships he was targeting. He preferred to use intimidation to convince ships to give up. It is estimated that he captured some 40 ships during his career as a pirate, targeting British, Spanish, Dutch, and Portuguese ships traveling from Europe to North America and the Caribbean.

The reverse field of Silver Blackbeard Rounds depicts the flag he often flew from the top of Queen Anne’s Revenge. The ship’s flag was black, as many pirate flags are said to have been, but featured a white skeleton raising a toast in one hand to the devil and a spear in its other hand that is aimed at a heart.

These 1 oz Silver Blackbeard Rounds are proof-like specimens with mirrored visual fields. Each one comes with a protective plastic flip and a Certificate of Authenticity. The rounds have a unique serial number etched on the edge that matches the number on the COA.

Silver.com customer service can assist you with questions about these 1 oz silver rounds at 888-989-7223. Alternatively, you can contact us online through our live chat and email address features.