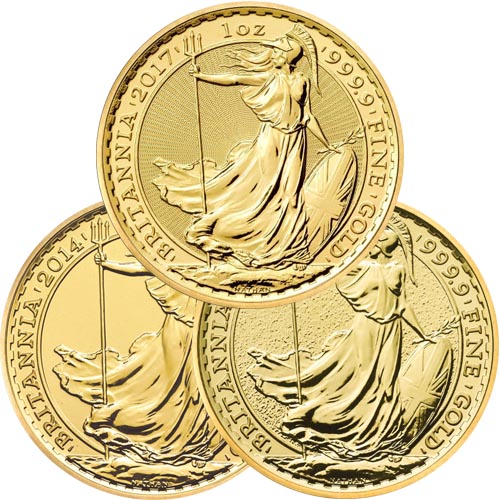 The Gold Britannia coin from the Royal Mint is one of Europe’s most popular and longest-running coin programs. Introduced in gold in 1987, the coin series has a silver counterpart in the Silver Britannia that was introduced a decade later in 1997. Today, the impressive 1 oz Gold British Britannia Coin from varied years is available to you online at Silver.com.

The content of Gold Britannia coin has changed in varying ways since the coins were introduced in 1987. Original 1 oz Gold British Britannia Coins were offered with 22-karat, .917, gold content and a non-gold component of copper. The gold content remained at 22-karats through 2012, but copper was replaced with silver from 1990 onward as the non-gold component in the coin.

Starting with the 2013 issue of the coins, the gold purity level was increased to .9999 gold. Designs on the current Britannia coins, 2016 onward, feature the effigy of Queen Elizabeth II by Jody Clark and the image of Britannia by Philip Nathan.

Each 1 oz Gold British Britannia Coin in this listing is available with a varied year of issue. Silver.com cannot guarantee the coin’s issue year, other than to note it will come from a year ranging from 1987 to the present. The specific year of issue you receive will depend upon what is available in our warehouse when your order is shipped.

On the obverse of 1 oz Gold British Britannia Coins you’ll find the right-profile portrait of Queen Elizabeth II. While 2016-issue and onward coins feature Clark’s most recent design, known as the fifth-generation depiction, there are two other possible obverse designs.

From 1984 to 1997, the Royal Mint used Raphael Maklouf’s third-generation depiction of the Queen. From 1998 to 2015, the mint used a fourth-generation design created by Ian Rank-Broadley.

The reverse of the 1 oz Gold British Britannias all feature the same design. The figure of Britannia is featured standing guard over the English Channel, protecting the British Isles from all invaders. Britannia was the name of the province when the Isles were under the control of the Roman Empire around the first century AD.

Please don’t hesitate to contact Silver.com with questions. You can reach our customer service team on the phone at 888-989-7223, connect with us online through our live web chat, or simply email us. Gold prices are updated on our homepage throughout the day for your convenience when shopping!