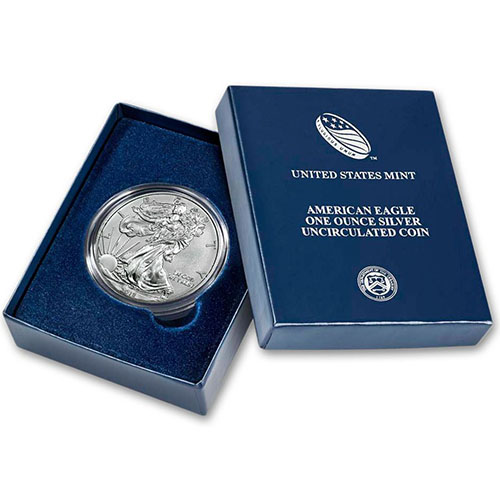 The Silver American Eagle is the official silver bullion coin of the US, and was first issued in 1986. It was initially available in bullion and proof versions. Burnished versions of the Silver Eagle were produced in 2006 – 2008 and 2011 – present. No burnished coins were produced in either 2009 or 2010. All versions of the Silver Eagle are struck only in the one troy ounce weight, and its content, weight, and purity are certified by the US Mint. The Silver Eagles were initially struck in the San Francisco Mint, spent 2 years being struck in the Philadelphia Mint, and then since 2001 have been struck in the West Point Mint. The burnished version of the coins have only been struck in the West Point Mint, and contain a W mint mark. Silver.com currently has 1 oz Burnished Silver American Eagle coins available for purchase.

The Walking Liberty design by Adolph A. Weinman is featured on the obverse of the Silver American Eagle coin. Weinman initially created this design for what became the Walking Liberty Half Dollar, which was issued from 1916 to 1947. It was then, and still is today, considered to be one of the most beautiful designs to ever appear on a coin. As a result, it was reprised in 1986 to appear on the Silver American Eagle. The full-length figure of Walking Liberty has a US flag draped over her shoulder. She is said to be walking in full stride toward the dawn of a new day, carrying branches of laurel and oak in her left arm.

The heraldic eagle design by then-US Mint Chief Engraver John Mercanti is featured on the reverse of the Silver American Eagle coin. Similar to the Great Seal of the United States, the design portrays a bald eagle, behind a shield, clutching an olive branch in its right claw and arrows in its left claw. Representing the 13 Colonies are 13 five-pointed stars above the eagle’s head.

The coins available in this listing are from various years. Since they are the Burnished Silver American Eagle coins, the exact year of mintage that you will receive will depend upon availability, as we select coins to fulfill your order only after your payment clears. We cannot guarantee date marks available at any given time and cannot guarantee a specific year. If you purchase more than one coin, you might receive coins with matching date marks.

If you have any questions, please contact our Silver.com Customer Service team, as we are ready to assist you. We can be reached via phone at 888-989-7223, via our online live chat, or via our email.