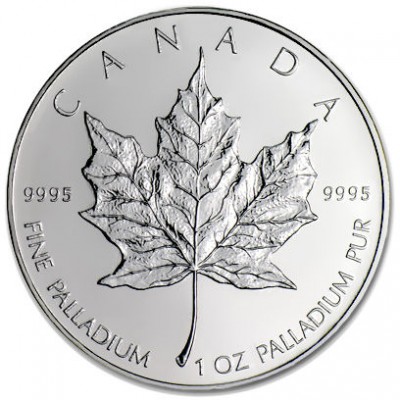 The Canadian Palladium Maple Leaf Coin was first produced by the Royal Canadian Mint in November of 2005. It enjoyed a very limited mintage until 2007 and then briefly again for one year in 2009, giving it one of the shortest releases in Canadian history. This coin also holds the distinction of being the first Canadian coin to ever be minted from palladium. Considering its unique history, it’s not surprising that it has become such a highly popular and elusive collector’s item. Each maple leaf coin has been minted from 1 troy ounce of the finest 99.95% pure palladium. It measures 38 mm in diameter and 3.29 mm in width. Individual coins currently have a face value at 50 Canadian dollars.

As with other maple leaf coins, the images featured on the Palladium Maple Leaf Coin speak to the hearts and spirit of the Canadian people. The eponymous maple leaf, which has become a symbol of peace and tolerance across Canada, is featured on the front of the coin. The reverse side honors its former British affiliation with an engraved portrait of Queen Elizabeth II. Despite its seemingly simple design, a closer look at these images reveals a meticulous attention to detail. From the intricate vein pattern of the maple leaf to the uncanny expression on HRM’s face, collectors are sure to appreciate skillful engraving it took to capture every design element.

JM Bullion would like you to become one of the privileged few to own such a significant piece of historical currency. However, because of its limited quantities, we recommend that customers order the Canadian Palladium Maple Leaf Coin while it’s still available. All merchandise is shipped free of charge with insurance against theft, loss or damage at no additional cost.

If you have any questions regarding this Canadian Palladium Maple Leaf Coin, please call us at 800-276-6508. You also have the option of using live chat or filling out one of the online forms. Our website features many grades and version of the maple leaf coin as well as other pieces to complete you collection.