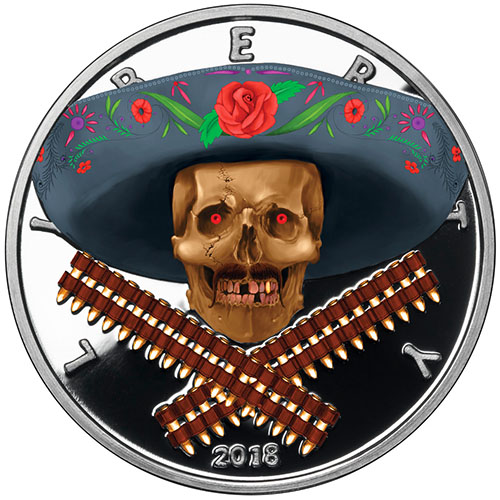 The Mexican Bandito is a figure that was often misunderstood in American folklore and popular culture when it came to the days of the Wild West. Often depicted only as gunslingers with itchy trigger fingers, the Mexican Bandito was complex just like the American gunslinger. The 1 oz Colorized Proof Silver American Western Skulls Mexican Bandito Round is currently available to you for online purchase at Silver.com.

Just as American gunslingers hid from their shady pasts in the American West’s vast expanses, so too did some outlaws from south of the border. Mexican outlaws were often referred to as banditos, an English derivative of the Spanish term bandido. These individuals didn’t always commit crimes though.

Some Mexican Banditos were gunslingers for hire who would complete Robin Hood-type works to help the disenfranchised take back what was rightfully theirs at the barrel of a gun. Other banditos were revolutionaries who overthrew corrupt governments in Mexico.

On the obverse of the 1 oz Colorized Proof Silver American Western Skulls Mexican Bandito Round, you’ll find the colorized image of the Bandito design. This figure wears a dark grey sombrero with beautiful, floral colors for the roses and other flowers on the brim of the hat. The bandolier of bullets features brass rounds and leather straps. Both of the banditos eyes are dark red and appear to stare right through the viewer.

The reverse face of the 1 oz Colorized Proof Silver American Western Skulls Rounds bears the image of the fried eagle. This image includes the nation’s heraldic shield with a triangular cluster of 13 stars above. However, this eagle is no longer a part of the world as it has died and has none of its feathers left.

We encourage all Silver.com customers to contact us with questions about buying silver at 888-989-7223. You can also connect with us online through our live web chat and email address features.