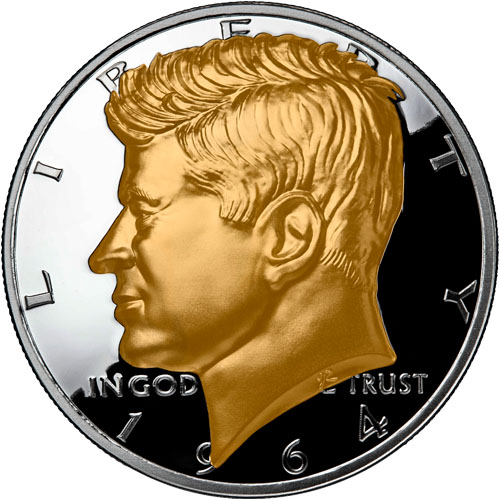 The Kennedy Half Dollar design was rushed into production to memorialize the assassinated president. Mr. Kennedy was assassinated while in office in November 1963 and the US Mint wanted to commemorate his presidency quickly. The half dollar was identified as the best coin design to replace. The Gilroy Roberts image of President Kennedy from his Presidential Series Medal was modified for use on the Kennedy Half Dollar allowing the mint to go from concept to strike and release between November 1963 and March 1964.

On the obverse side of 1 oz Colorized Silver Domed American Legacy Kennedy Half Dollar Rounds is the left-profile bust of President John F. Kennedy. In this design, gold colorization is added to the portrait of Kennedy to create visual contrast from the background field. The domed surface and powerful strike creates 10 times greater visual depth and increases the visual intricacy of the details.

The reverse face of Colorized Silver Domed American Legacy Kennedy Half Dollar Rounds bears the right-profile version of the same portrait from the obverse struck into the sunken field of the round on this side.

These 1 oz Colorized Silver Domed American Legacy Kennedy Half Dollar Rounds ship with a protective plastic capsule and numbered Certificate of Authenticity. The rounds have a unique serial number on the edge that matches the COA.

Silver.com encourages our customers to call us with questions at 888-989-7223. You can also chat with us live online or email us directly.