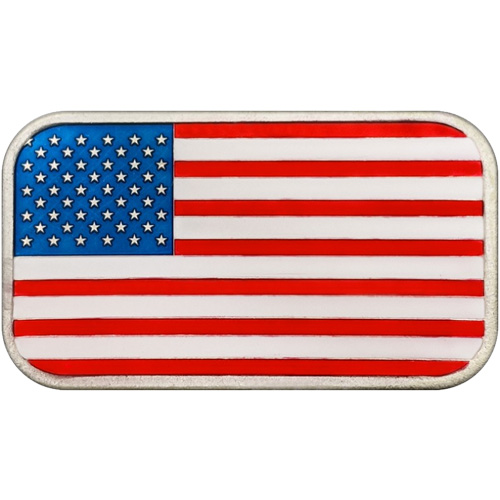 From the early days of the American Revolution to the 21st century, American resolve in the face of challenges is not the only thing that has remained unwavering. Old Glory, the American flag, has remained a constant for a nation that has grown, struggled, and emerged from challenging days with renewed optimism time and again. Today, 1 oz Colorized Silver SilverTowne American Flag Bars are available to you online at Silver.com.

When the first units of American colonists began to form the Continental Army and Navy, the flag they adopted was a twist on the Union Jack of the United Kingdom. However, the need for a separate flag reflective of the ideals and resolve of the American colonists was soon evident. The first official American flag was not too different from today’s flag, with a ring of 13 stars on a blue field being the standout difference. Today’s American flag carries on a tradition more than 245 years in the making.

All of these 1 oz Colorized Silver SilverTowne American Flag Bars are available to purchase with individual capsules for delivery and storage. These bars offer a stunning, colorized image of the American flag on the obverse field and were produced in the United States by Indiana-based SilverTowne.

The obverse side of the Colorized Silver SilverTowne American Flag Bars comes with a depiction of Old Glory. The American flag consists of 13 horizontal stripes and a field in the upper left with stars. The stripes on the modern flag reflect the original 13 colonies that broke with the United Kingdom to form the United States of America. The field with stars has been ever-changing over the course of American history to reflect the growing number of states in the Union. Each bar available in this series comes with hand-painted enameling to bring out the vibrant colors of the American flag.

The current iteration of the American flag has been in use since 1959 and offers 13 stripes, seven of them red and six white. The blue field in the corner now offers 50 white stars aligned in tight rows.

On the reverse of the 1 oz Colorized SilverTowne American Flag Bar is a blank design field. The weight, metal content, and purity are noted on this side, but the central field is blank.

Please contact Silver.com if you have any questions when you buy silver bars. You can call us at 888-989-7223, chat with us live online, or email us directly.