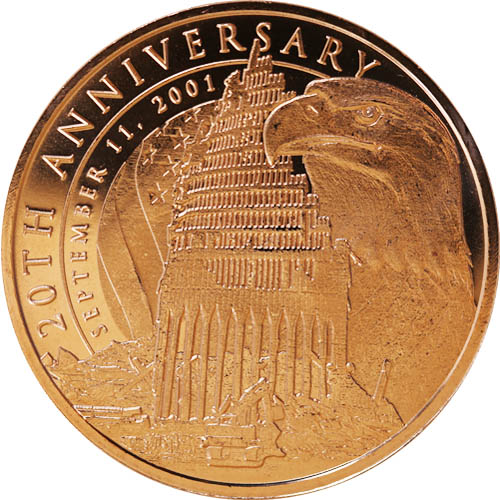 Each year that has passed since the horrible events of September 11, 2001, has brought with it an increased sense of peace, but also a reminder of the lives lost on that day. In New York City alone, thousands of Americans lost their lives as two airliners struck the Twin Towers of the World Trade Center and brought the buildings down. As the nation pauses to remember the 20th anniversary, commemorative coins and rounds are available that mark this important date. Right now, 1 oz Copper 9/11 20th Anniversary Rounds are available to purchase online at Silver.com.

Each of the 1 oz Copper 9/11 20th Anniversary Rounds available to you at Silver.com comes in brand-new condition from the mint. The copper rounds are packaged individually inside of plastic flips, with multiples of 20 in plastic tubes and multiples of 500 in Monster Boxes. The box holds a total of 25 tubes inside.

September 11, 2001, was not just an attack on the financial heart of the nation in New York City, but also on its governmental center in Washington D.C. By far, the majority of the lives lost that day came in New York City when the Twin Towers at the World Trade Center collapsed. However, hijackers also succeeded in striking the Pentagon. A fourth plane was also supposed to strike at Washington D.C., but the brave Americans on board that jet fought back against the hijackers, and the plane eventually crashed in a field in Pennsylvania instead.

On the obverse of 1 oz Copper 9/11 20th Anniversary Rounds is the image of the wreckage of one of the towers at the World Trade Center. This mangled wreck of steel beams was the only thing left standing after both towers collapsed following the collision of fuel-laden airliners with the massive structures. In this design, the American bald eagle flanks the wreckage on the right as the American flag is found on the left.

The reverse side of Copper 9/11 20th Anniversary Rounds features a common design element from the mint. This copper design shows the wings of a bald eagle spread out as it supports the US national shield.