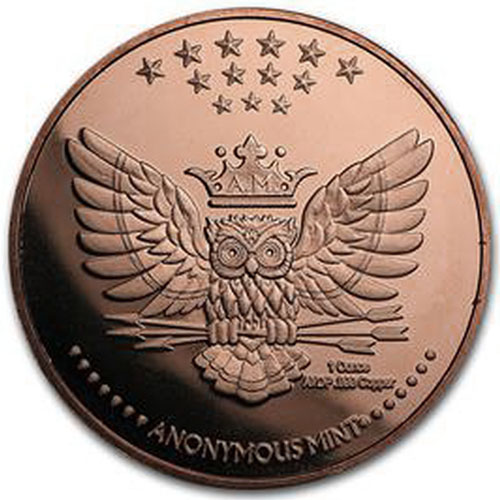 Anonymous Mint has built an impressive reputation for creating round series that feature low mintage figures and must-have designs. Among the recent releases was the Bitcoin Guardian, which capitalized on the phenomenon of a currency you can never hold in your hand. Now, Anonymous Mint is back with a Bitcoin design on a round backed by its own Anonymous Mint logo. The 1 oz Copper Bitcoin Anonymous Owl Round is available to you for purchase online today at Silver.com.

Bitcoin is unique among the global currencies of the world in that it does not exist in any physical form. There is no bank or ATM one can go to in order to withdraw Bitcoin. It exists entirely as a computer code that is stored in a virtual wallet online. It can be used for peer-to-peer transactions that cross international borders with ease while protecting the identity of the users involved in the process.

The Anonymous Mint’s designs on the 1 oz Copper Bitcoin Anonymous Owl Round are immensely popular and come together for the first time. Bitcoin may not exist, but it does already have a well-recognized symbol that mirrors the imagery of the US Dollar “$” symbol.

On the obverse of the 1 oz Copper Bitcoin Anonymous Owl Round you’ll find that popular logo. The large “B” is situated in the center of the design field with two vertical lines struck through its center. There are engravings on the upper and lower rockers that read “Premier Peer to Peer Crypto Currency” and “Physical Artifact for the Real World,” respectively.

The reverse side of the Copper Bitcoin Anonymous Owl Round features Anonymous Mint’s popular mint logo. Similar to the US heraldic eagle, the wise and all-knowing owl has its large eyes fixed on the viewer as it stands with wings spread wide. The owl clutches three arrows in its talons, wears a crown with “AM” initials for the mint engraved upon it, and has a collection of 13 stars above its head. The weight, purity, and metal content also feature on this side.

Anonymous Mint is a private American coining operation. This program, like many others, is driven by the creative talent of Anonymous Mint’s lead coin designer Julie Lindquist.

We encourage Silver.com customers to contact us with questions. You can call us at 888-989-7223, chat with us live online, or email us directly. The bitcoin price is now listed on our website as well for you to track!