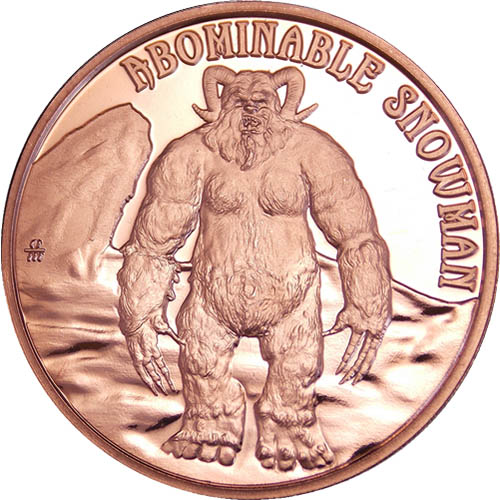 The Cryptid Creatures Series is a four-round collection featuring various animals studied by cryptozoologists. Cataloged in the cultural folklore of civilizations around the world, cryptid creatures include the likes of the Jersey Devil, Drop Bear, and the Jackalope. One of the most recognizable beasts to appear in the series is the Abominable Snowman. Today, 1 oz Copper Cryptid Creatures Abominable Snowman Rounds are available to you online at Silver.com.

Cryptid creatures exist in the folklore of cultures around the world, from Australia and Asia to the indigenous tribes and cultures of Africa, South America, Central America, and North America. In some cases, a similar beast is known by different names depending on the corner of the world you are studying such a creature in or listening to the tales of. One example is the Abominable Snowman.

All of the 1 oz Copper Cryptid Creatures Abominable Snowman Rounds in this listing at Silver.com are available to ship individually packaged or by multiples of 20. Individual copper rounds will ship in protective plastic flips, while multiples of 20 copper rounds are housed inside plastic tubes.

The obverse of the Copper Cryptid Creatures Abominable Snowman Rounds features a depiction of the massive Abominable Snowman. There are countless descriptions of the Abominable Snowman and various written records that detail its appearance. In this design, a large beast with long fur and a muscular frame is shown with curled horns on its head and long claws on its hands.

Also known as the Yeti, the Abominable Snowman comes from the pre-Buddhist cultures of various Himalayan peoples. The earliest encounters Westerners had with this legend came in the 19th century, when James Prinsep published an account in 1832 of BH Hodgson who had encountered a tall, dark, hairy beast in northern Nepal.

On the reverse side of 1 oz Copper Abominable Snowman Rounds, you will find the common design element from the collection. The seal found here includes a US national shield, eagle’s wings, and an American flag.

Please don’t hesitate to reach out to Silver.com with questions about copper rounds. You can call us at 888-989-7223, chat with us live online, or email us directly.