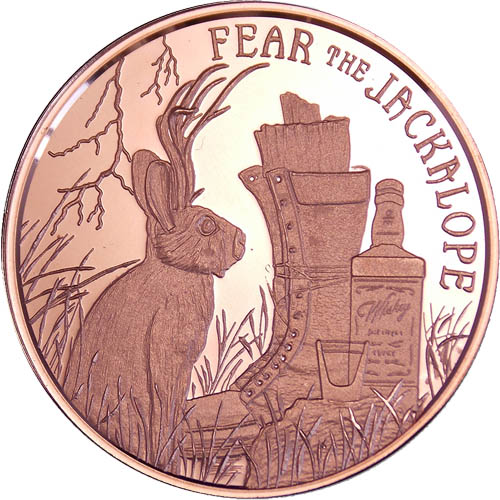 Cryptozoology is the study of animals recorded in folklore that mainstream scientists do not believe ever existed. While many view cryptozoology as pseudoscience, there are subcultures that vehemently believe creatures such as Bigfoot, the Loch Ness Monster, and the Jersey Devil do exist. Now, 1 oz Copper Cryptid Creatures Fear the Jackalope Rounds are available to you for purchase online from Silver.com.

The term cryptid is used in the Cryptid Creatures Series as a nod to the animals that feature on the obverse of the copper rounds. The term applies to animals that cryptozoologists believe exist somewhere in the wild, but that have not been discovered, studied, and cataloged by mainstream science.

Among the creatures you are likely familiar with, Bigfoot and the Loch Ness Monster are arguably the most popular. However, others exist that are lesser-known. The Jackalope is one of those lesser-known, mythical animals. Native to North America, Douglas Herrick and his brother are credited with coming up with the Jackalope in the 1930s.

The obverse side of 1 oz Copper Cryptid Creatures Fear the Jackalope Rounds features an image of a seated Jackalope. The Jackalope that Herrick and his brother created using their own taxidermy skills was made by grafting a set of deer antlers on the head of a jackrabbit carcass. In this design, the Jackalope is seated near a boot with a human foot still inside and a bottle of whiskey.

On the reverse field of Copper Cryptid Creatures Fear the Jackalope Rounds is a common design element. With a tattered and worn visual, this symbol used by the Osborne Mint shows a version of the US national shield, eagle’s wings, and the American flag.

These 1 oz Copper Cryptid Creatures Fear the Jackalope Rounds are available to you in brand-new condition. The copper rounds are packaged individually inside of plastic flips or by multiples of 20 in plastic tubes.

Silver.com customer service is available to assist you at 888-989-7223. Our team is also available to you online using our live chat and email address features.