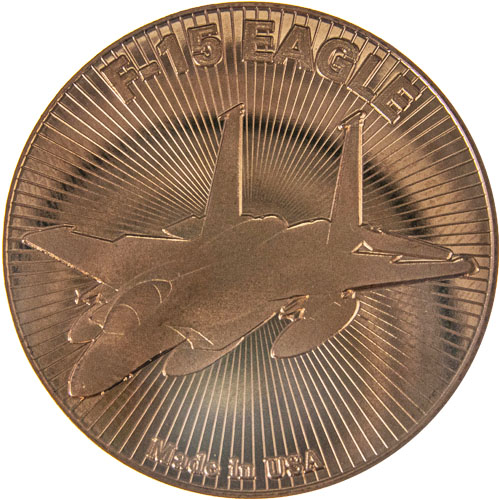 The United States Air Force is the most vaunted air force in the world today. Its stable of tankers, bombers, electronic warfare platforms, and fighters jets is second to none in the world, and the F15 has long been a backbone of the service. Right now, 1 oz Copper F-15 Eagle Rounds are available to purchase online from Silver.com.

On the obverse of the Copper F-15 Eagle Rounds is a depiction of the F-15 Eagle. The F15 was designed for air-superiority and, thought the plane does not have any stealth capabilities, it remains the most important air-superiority fighter in the US Air Force inventory.

If you have any questions about these copper rounds, please don’t hesitate to ask. Silver.com customer service is available to assist you at 888-989-7223, online using our live chat, and through our email address.