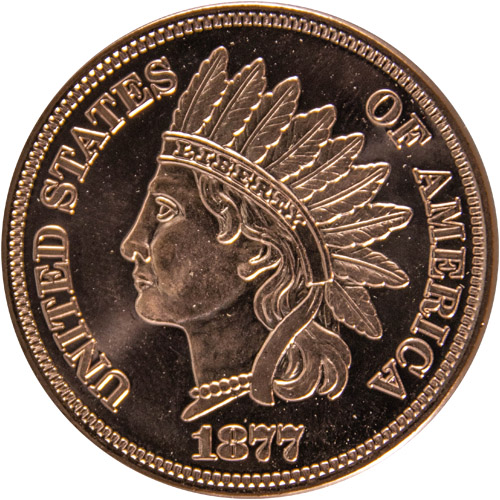 The United States Penny was once issued with 95% copper in the metallic alloy of the coins. The first coin in this denomination to feature this high amount of copper was the Indian Head Cent, a coin designed and released in 1858 that would remain in circulation until the early 20th century when it was replaced by the current Lincoln Penny. This design is a fitting one to replicate on copper rounds. Today, 1 oz Copper Indian Head Penny Rounds are available to you online at Silver.com.

In 1858, the United States Mint replaced the Flying Eagle Cent with a design that came to be known as the Indian Head Cent. Though the coin’s name suggests the appearance of an indigenous American figure on the obverse, it was actually a bust of Liberty wearing a feathered headdress. This was a common design concept on American coins of the mid-to-late 19th century.

All of these 1 oz Copper Indian Head Penny Rounds are available to purchase in this listing individually or in bulk. Individual copper rounds come in protective flips. Multiples of 20 rounds will arrive in a plastic tube, while multiples of 500 rounds come in a box. The typical box holds a maximum of 25 individual 20-round tubes.

The obverse of Copper Indian Head Penny Rounds features a depiction of Lady Liberty. Based on James B. Longacre’s 1858 design, this left-profile relief of Liberty shows her figure wearing a feathered headdress. The commemorative markings of the Indian Head Cent appear on this side and include both the nation of issue and a date mark from the era of the Indian Head Cent.