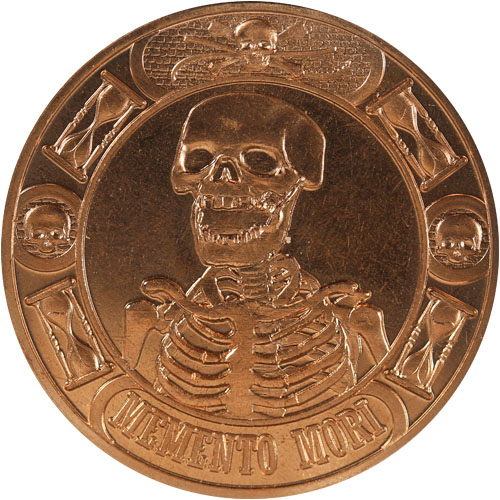 As humans constantly seek to live a better life and extend the potential of the human lifetime, there is an equal obsession with death. No matter what we do to extend our lives, death is always waiting just around the corner. Right now, 1 oz Copper Memento Mori Rounds are available to purchase online at Silver.com.

The phrase memento mori originates in Latin and is credited to the era of the Roman Empire. It is said that a successful Roman general returning to a parade in Rome was quietly reminded by a slave that even his great power and success would eventual succumb to the will of death. From the Medieval Era until the Victorian Era, funeral art with images of skulls and reaping blades were common as a reminder that we are all mortal, no matter how rich and successful.

On the reverse side of Copper Memento Mori Rounds is a depiction of the Anonymous Mint logo. In this design, the owl is set in front-facing relief with a crown atop its head with 13 stars overhead. The owl clutches arrows in its talons and the name of the mint is featured at the bottom. In the Medieval Period in Europe, owls were believed by some to be priestesses or wizards that took on the form of the bird.

These copper rounds of the Memento Mori Series were designed by Julie Lindquist, the lead coin designer for the Anonymous Mint. The design was previously issued to collectors as a limited-issue antique silver round.