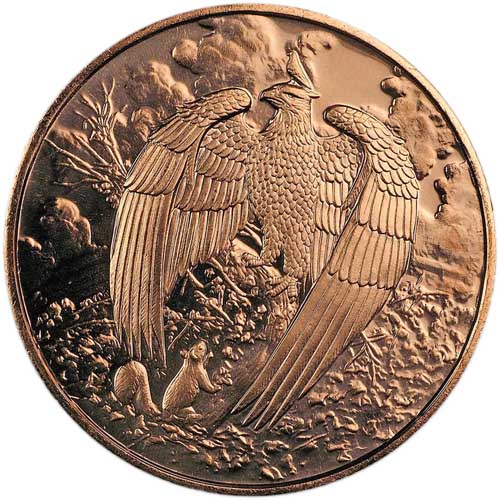 As the Nordic Creatures Series of silver and copper rounds from the Anonymous Mint concludes, one of the most graceful and powerful beasts from Norse mythology brings the collection to a close. The Great Eagle rests at the very highest branch of The World Tree in the final release of the series. Now, 1 oz Copper Nordic Creatures Great Eagle Rounds are available to you for purchase online at Silver.com.

The Nordic Creatures Series is a popular companion series to the Anonymous Mint’s previous Norse Gods Series. Rather than focusing on the deities that ruled the Norse world, this collection focuses on the creatures that helped the gods, opposed the gods, or served another role in the annals of Norse mythology.

With the first release of the series, the Anonymous Mint took viewers to the underworld and the realm of Nidhogger. This dragon dwelled beneath the roots of The World Tree, constantly gnawing at those roots in an attempt to destroy the tree. In the final release, you are whisked to the highest branches of The World Tree up in the heavens where The Great Eagle resides. From here, the eagle can keep a watch over the entire world and protect The World Tree from threats.

On the reverse field of Copper Nordic Creatures Great Eagle Rounds is a depiction of The World Tree. The common design element across the series, the World Tree covers the realm of Nidhogger and is home to the Great Eagle at its highest point. The two creatures, first and last in this series, are bitter enemies.

These 1 oz Copper Nordic Creatures Great Eagle Rounds are available to you individually in plastic flips. Multiples will ship in tubes of 20 or boxes of 500. The box holds 25 tubes of 20 rounds each.