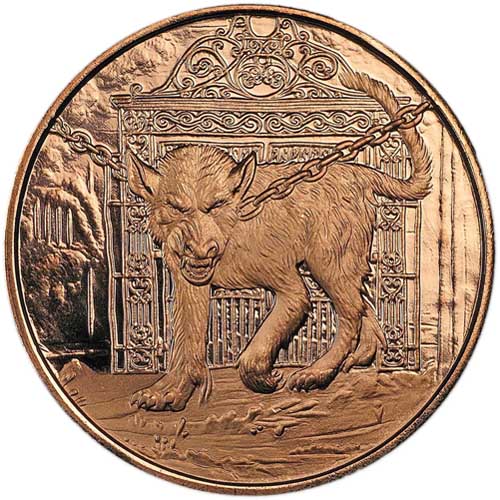 The Nordic Creatures Series from the Anonymous Mint offers breathtaking images of some of the most powerful beasts from Norse mythology. The eight-legged horse of Odin to the fearsome Frost Giant have all been featured in the series already, and as it reaches its conclusion with this fourth release, another creature from the underworld makes an appearance. Today, 1 oz Copper Nordic Creatures Hellhound Rounds are available to you at Silver.com.

The Anonymous Mint’s Nordic Creatures Series has already featured three designs prior to this release of Garm the Hellhound. In the first three releases, the series depicted the Dragon Nidhogger, the Frost Giant, and Odin’s Steed Sleipner, respectively. Garm the Hellhound is the penultimate release, with the final design set to feature the Great Eagle.

The obverse of Copper Nordic Creatures Hellhound Rounds features an image of Garm the Hellhound. This half-monster, half-wolf is assigned to the literal gates of hell as a guardian of the realm. Hel, the Goddess of Death and ruler of Helheim, keeps this dog-like beast chained to the gates of her mansion to keep intruders at bay, or more likely, to keep those poor souls condemned to Helheim inside.

On the reverse side of the 1 oz Copper Nordic Creatures Hellhound Round is a depiction of The World Tree. This holy site in Norse mythology has branches that reach all the way up into the heavens and a vast root system that covers the world. The design includes a buck standing next to the three, a snake slithering on the ground near its base, and a raven in the branches of the tree.

Please contact Silver.com if you have any questions. Please call us on the phone at 888-989-7223, chat with us live online, or email us directly.