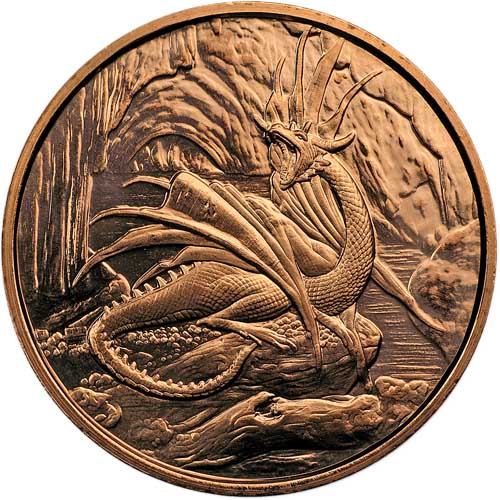 The creatures of Norse mythology are as powerful and terrifying as any of those mentioned in the annals of Greek and Roman mythology. In the new Nordic Creatures Series of silver and copper rounds from the Anonymous Mint, these fantastical beasts feature in five distinct designs for collectors. Right now, 1 oz Copper Nordic Creatures Nidhogger Rounds are available to purchase online at Silver.com.

Each of the 1 oz Copper Nordic Creatures Nidhogger Rounds is available to purchase as a brand-new item from the Anonymous Mint. The copper rounds in this series come with plastic flips for individual rounds, acrylic tubes for multiples of 20, or boxes of 500 rounds. The boxes hold a total of 25 tubes.

There are a total of five designs planned in the Nordic Creatures Series from the Anonymous Mint. Created by Julie Lindquist, the lead coin designer at the mint, the collection promises images of the dragon Nidhogger, the Frost Giant, the steed of Odin known Sleipnir, the hellhound known as Garm, and the Nordic Eagle.

On the obverse of the Copper Nordic Creatures Nidhogger Rounds is an image of the dragon known as Nidhogger. According to Norse mythology, Nidhogger lives in the depths of the world. In fact, he lives beyond Hel in a place known as Niflheim. This is the grimmest of all places in the world of Norse mythology. It is here that the wicked of society are thrown to be devoured by Nidhogger.

The reverse field of 1 oz Copper Nordic Creatures Nidhogger features a depiction of the holiest place in Norse mythology, The World Tree. Known as Yggdrasil, the World Tree is the site where the gods of Norse mythology gather on a daily basis. It is here that the gods decide what actions are just and which are unjust. From The World Tree, the gods cross the rainbow tree to return to their home in Asgard.

The designs of the Anonymous Mint Nordic Creatures Series were created in-house by Julie Lindquist and struck at America’s oldest private mint, the Osborne Mint.