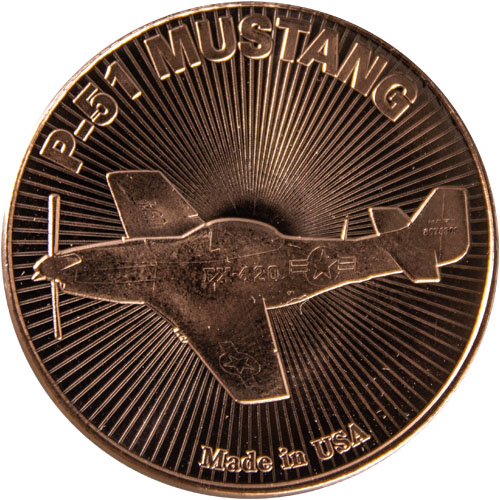 In the effort to defeat Fascism during World War II, the Allies needed to find a way to own the skies over Europe. Before the entrance of the United States into the conflict, the Americans provided England and France with weapons and armaments to help defeat Nazi Germany. One of the most important tools the Americans provided through the Lend-Lease Program was the P-51 Mustang. Today, 1 oz Copper P-51 Mustang Rounds are available to you online at Silver.com.

In the obverse design of the Copper P-51 Mustang Rounds, the mint features an image of the mighty P-51 in flight. The Mustang was first developed as a tactical reconnaissance platform that also had capabilities as a fighter. However, the original models lacked the engine power to match the altitude and power of the aircraft of the Luftwaffe. By the time the P-51 D Mustang was released late in the war, the Allies were able to dominate the skies by surpassing the altitude and speed capabilities of German fighters, and boasted six M2 Browning Machine Guns with .50 caliber rounds.

For the reverse field of the 1 oz Copper P-51 Mustang Rounds, the mint offers its common design element for copper collections. The design features the image of a US national shield with three stars, a set of eagle’s wings, and a version of the American flag above the design element.

Please contact Silver.com if you have any questions. Our team is available to assist you at 888-989-7223, online using our live chat, and via our email address.