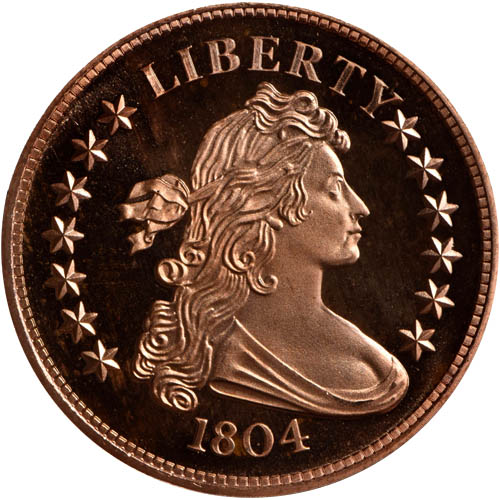 The 1804 Dollar featuring an image of Liberty was released by the United States Mint not in 1804, but rather throughout the 1930s. The coins were not produced for circulation but rather were issued as commemorative proofs that were intended for use on a diplomatic mission. Now, 1 oz Copper SilverTowne 1804 Dollar Rounds are available to you for purchase online at Silver.com.

In the 1830s, the United States Mint began to produce a Bowed Liberty Dollar design for use in a diplomatic mission. The mission was to be conducted by Edmund Roberts with the special commemorative proofs to be given to the foreign dignitaries of Siam and Muscat. Roberts first distributed the coins in 1834 and 1835.

More versions of the 1804 Dollar were produced by the United States Mint starting in 1834 and 1835 for Roberts to use in visits to Japan and Cochinchina. However, Roberts died in Macau before he could deliver the coins. Even though the coins had an 1804 date mark, none of them were produced outside of the 1830s and 1840s, and none were issued for circulation.

On the obverse face of the 1 oz Copper SilverTowne 1804 Dollar Round is a right-profile bust of Liberty. This image of Liberty was exclusive to the 1804 Dollar and depicted her figure without a crown, her hair down and flowing behind her head. Inscriptions include her name as “Liberty” with 13 stars around the design element and the commemorative date mark.

The reverse side of 1 oz Copper 1804 Dollar Rounds includes an image of the American bald eagle. The eagle is shown swooping down from an angle that presents the back of the bird. The bird swoops down with its talons extended to capture its prey as its wings extend to slow its descent.

These 1 oz Copper SilverTowne 1804 Dollar Rounds are available to you for purchase online in brand-new condition. Individual copper rounds arrive in a protective plastic flip, while multiples are housed in tubes of 16 or boxes of 400. The box will contain a total of 25 tubes of 16 rounds each.

Silver.com customer service is available to you at 888-989-7223. You can also connect with us online through our live chat and email address features.