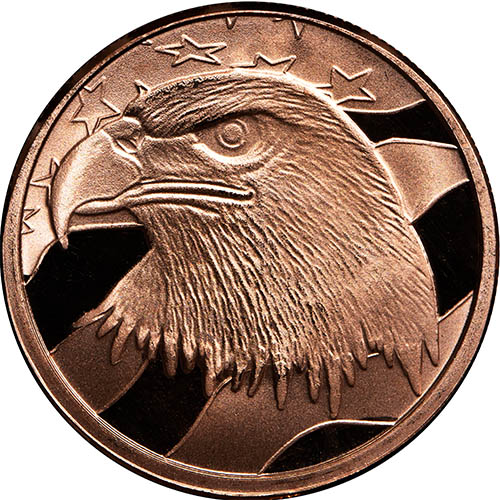 There are many ways to invest in precious metals, with copper representing one of the more affordable options in the 21st century. Copper prices are significantly lower than other metals and present a great option for diversifying holdings. Today, 1 oz Copper SilverTowne Eagle Rounds are available to you online at Silver.com.

Since 1792, the American bald eagle has been the national symbol of the United States of America. It featured prominently on the nation’s first gold coins and continues today in the official seal of the United States. Bald eagles are one of two subspecies in the sea eagle family. The birds are often found near large bodies of open water and live in massive nests. The bald eagle’s nest is typically 13 feet deep and 8.2 feet wide.

All 1 oz Copper SilverTowne Eagle Rounds are available to purchase inside of individual protective plastic flips or mint tubes of 16 rounds. Multiples of 400 rounds are available in boxes containing 25 tubes in total. Each individual specimen is offered in brand-new condition. The copper rounds feature an image of the American bald eagle on both sides of the round.

The obverse of 1 oz Copper SilverTowne Eagle Rounds includes the left-profile image of an eagle’s head. The steely gaze of the bald eagle is fixed on an item in the distance as the American flag flutters in the background field. Eagles are opportunistic feeders and live primarily on fish. The birds use their impressive eyesight and diving speed to swoop down on fish in the water and snatch them up with their talons.

On the reverse of Copper SilverTowne Eagle Rounds is a depiction of the American bald eagle in flight. The bird’s wings are spread to their widest point as its back is toward the viewer and its talons are stretched out to clutch its prey. There are also inscriptions of “USA” which extends to a tip with the “S” marking the longest letter and two lines featured above. There is also a star in the design field.

SilverTowne is a private mint in Winchester, Indiana. It was first opened as a small coin shop and has grown into one of the most respected private mints in the country.

Please don’t hesitate to reach out to Silver.com if you have any questions. You can call us at 888-989-7223, chat with us live online, or simply send us an email.