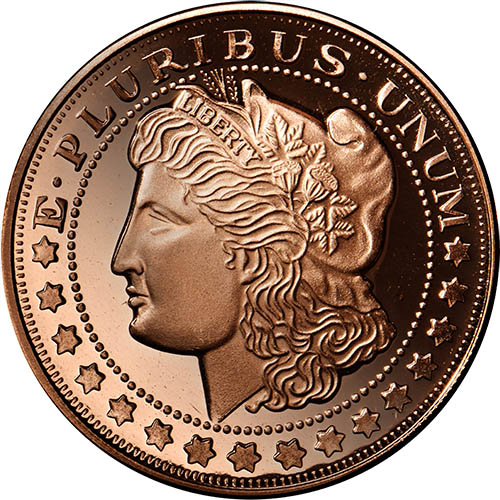 Some of the most coveted coin designs in American history are available to modern investors and collectors in more options that just historic coins. Designs such as Liberty from the Morgan Silver Dollar are still available in their original form, as well as silver and copper rounds. With affordable copper prices, copper rounds have become an increasingly popular choice for those who want to diversify across various metals. Right now, 1 oz Copper SilverTowne Morgan Dollar Rounds are available to purchase online at Silver.com.

Each 1 oz Copper SilverTowne Morgan Dollar Round is available to you for purchase today in brand-new condition. These individual copper rounds are available inside of protective plastic flips. Orders containing multiples are offered with tubes of 16 rounds or boxes of 400 rounds housed in 25 tubes.

The Morgan Silver Dollar entered circulation in the United States in 1878. It was the replacement for the Seated Liberty Dollar that had ceased production in 1873 with the passage of the Coinage Act of 1873. The Morgan Silver Dollar design was created by George T. Morgan and remained in circulation until 1904. Silver dollar coining ended at that point and did not return until after World War I. The Morgan design was struck for a short period in 1921 and eventually replaced that same year by the Peace Silver Dollar design.

On the obverse of these 1 oz Copper SilverTowne Morgan Dollar Rounds is the image of Lady Liberty in left-profile relief. The outer design field includes the inscription of “E Pluribus Unum” with 16 stars along the bottom. In the center, Liberty is captured in left-profile relief wearing a band in her hair with “Liberty” inscribed and a wreath crown.

The reverse of all Copper SilverTowne Morgan Dollar Rounds is the image of the American bald eagle. The powerful bird is depicted along with the inscription of “USA” and a single star.

SilverTowne produces these copper rounds for collectors. The company is one of the most respected, largest private mints in the US today. It was founded in 1949 by Leon Hendrickson as a small coin shop and has grown exponentially since.