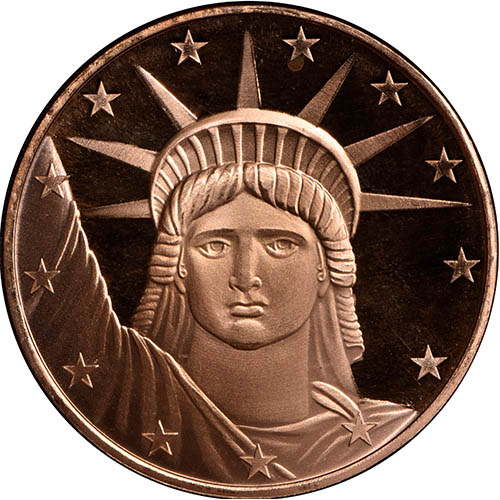 A symbol of the promise offered by the freedoms of America is the Statue of Liberty. Gifted to the American people by the people of France and designed by Frederic Auguste Bartholdi, Liberty’s face is the first one that millions of immigrants saw when arriving in New York Harbor at Ellis Island over the course of six decades from the late 19th century to the mid-20th century. Still standing today, the Statue of Liberty is available on a copper round from SilverTowne in the 1 oz Copper SilverTowne Statue of Liberty Round at Silver.com.

The concept of the Statue of Liberty was inspired by a French law professor and politician. Edouard Rene de Laboulaye commented in 1865 that any proper celebration of America’s centennial of independence should be a joint effort between the American and French people. Given France’s role as the first major world power to recognize and support an independent America, it was a fitting tribute.

Mr. Bartholdi began work almost immediately trying to secure funds and build the Statue of Liberty. The first piece of Lady Liberty to arrive in America was the torch-bearing arm that went on display at the Centennial Exposition in Philadelphia in 1876. From 1876 to 1882, the arm was on display in Madison Square Park in Manhattan. With funds finally in hand by late 1885 and early 1886, the statue was constructed in France and shipped to America in pieces to be rebuilt on a pedestal on what was then known as Bedloe’s Island.

The obverse of 1 oz Copper SilverTowne Statue of Liberty Rounds includes the image of Liberty’s face. She is depicted with her traditional high-pointed crown and a circle of 13 stars around the design field. When the Statue of Liberty was finally built, New York City held its first-ever ticker-tape parade and President Grover Cleveland presided over a dedication ceremony.

On the reverse of Copper SilverTowne Statue of Liberty Rounds is the image of an American bald eagle. The national symbol of America, the bird’s wings are spread wide and the initials “USA” are inscribed next to the eagle. The SilverTowne mint mark of a small pick-ax is depicted at the bottom of the design field.

These 1 oz Copper SilverTowne Statue of Liberty Rounds are available individually with protective flips, in multiples of 16 with mint tubes, or in boxes of 400 with 25 tubes in total. All copper rounds are in brand-new condition.

We encourage Silver.com customers to call us with questions at 888-989-7223. We are also available to you online through our live chat and email address features.