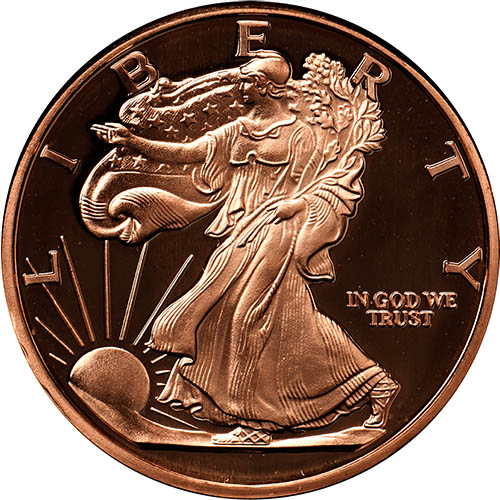 American circulation coins underwent a massive transformation in the early 20th century. Among the most prominent designs to emerge during this period was Walking Liberty. Originally featured on the US half-cent piece, Walking Liberty has been recreated on various silver coins, silver rounds, and even copper rounds. Today, 1 oz Copper SilverTowne Walking Liberty Rounds are available to you online at Silver.com.

Adolph A. Weinman created the image of Walking Liberty in 1916 at the end of a major transition period for US coin designs. Prior to the early 20th century, the last major coin redesign occurred in 1892 when US Mint Chief Engraver Charles E. Barber created images of Liberty for use on the dime, quarter, and half-dollar. Weinman’s Walking Liberty replaced Barber’s design on the half-dollar coin and remained there until 1947.

The obverse of the Copper SilverTowne Walking Liberty Round features the image of Walking Liberty. She is depicted in left-profile relief with the American flag draped over her shoulders as she walks toward the sun on the horizon. Her left hand clutches the branches of oak and laurel symbolizing the civic and military prowess of the United States.

On the reverse of 1 oz Copper SilverTowne Walking Liberty Rounds is the image of an American bald eagle. Common to many SilverTowne copper rounds, this side of the round includes an American bald eagle with its wings stretched and talons flexed to capture its prey. The initials “USA” are inscribed below two horizontal lines and there is a single star in the design field.

Please feel free to reach out to Silver.com with questions. You can reach us on the phone at 888-989-7223, connect with us through our live chat, or simply email us.