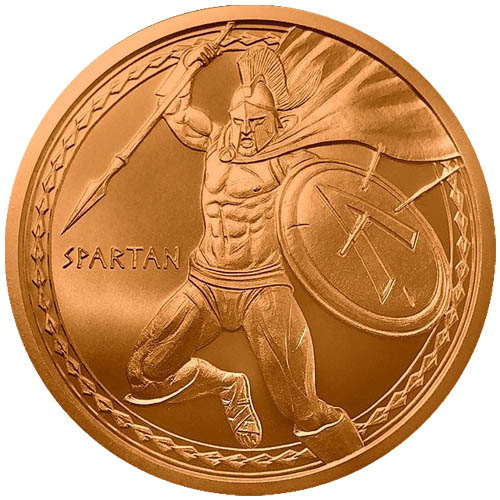 Sparta was once the most prominent city in Ancient Greece. A city-state at the time within what was then a collection of city-states in Greece, Sparta was not the most prominent because of its wealth or vast lands. Instead, it was the fearsome and powerful Spartan warrior that established the city-state as the preeminent force. The 1 oz Copper Spartan Warrior Round captures the image of one of these towering military figures in the first design of a new collection, and it is currently available at Silver.com.

Copper prices have risen significantly in the 21st century. Though it is not grouped with other precious metals, instead being viewed as a commodity, copper is a popular metal for the production of collectible pieces within the precious metals industry. 1 oz copper rounds are the most common form of copper product available.

1 oz Copper Spartan Warrior Rounds capture the image of one of the ancient world’s most feared armies. The Spartan army had an air of invincibility about it and would often fight to the death rather than surrender or retreat. The most well-known story of the Spartan army comes from the Battle of Thermopylae when King Leonidas led an undermanned force of Spartans to meet the massive Persian Army. His forces fought to the very last man to delay the Persian advance while inflicting thousands of casualties on the Persians.

On the obverse of 1 oz Copper Spartan Warrior Rounds is the image of a strong, muscular figure. This warrior wears all the classical gear of the Spartan soldier. A cape is around his shoulders and he wields a shield to protect himself, with which he’s already blocked several arrows. In his right hand, he holds a long spear that he is ready to drive into his enemy.

The Spartan armies many successes came down to superior training and tactics. Spartan armies employed the same tactic in most battles. The phalanx wall tasked each man with standing shoulder to shoulder with his fellow Spartan, using their shields to form an impenetrable wall. They would withstand an enemy charge, push back in unison as they stabbed spears through the wall to slay the enemy.

For the reverse of Copper Spartan Warrior Rounds, you’ll find the image of a Corinthian helmet worn by Spartan warriors. The background includes three different weapons popular with the Spartans. The long spear, the short sword for close, hand-to-hand combat, and a battle ax.

We encourage Silver.com customers to call us with questions at 888-989-7223. You can also reach us online through our live chat and email address features.