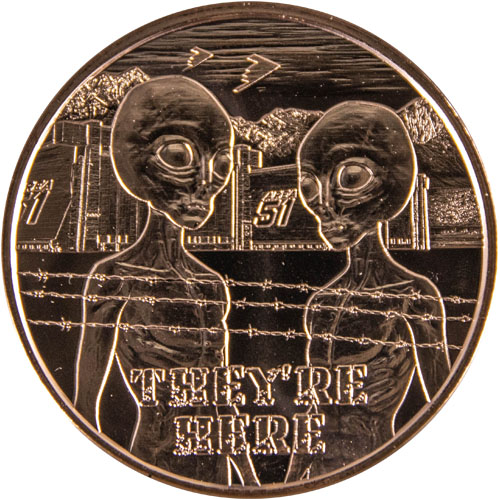 Whether you believe in aliens or not, there are those who believe that aliens not only exist, but that they’ve previously visited planet Earth. The question now is, are those aliens still on our planet today? In the design of this new copper round, those who believe aliens are here will see two aliens at Area 51. Right now, 1 oz Copper They’re Here Aliens Rounds are available to purchase online at Silver.com.

Each one of these 1 oz Copper They’re Here Aliens Rounds comes with plastic flips for individual specimens. Multiples are offered in protective tubes of 20 rounds or boxes of 500 copper rounds. The box can hold up to 25 separate 20-round tubes.

The new They’re Here Aliens Round in this copper release features a design celebrating the belief that not only have aliens visited planet Earth in the past, but that some of them may even still be here today. While there are countless reports each year of UFO sightings and encounters with “little green men,” the most popular story in American culture regarding alien beings was the 1947 crash in Roswell, New Mexico. Many believe that not only did an alien craft crash land that day, but that alien bodies were recovered by the military and taken to Area 51.

The obverse of Copper They’re Here Aliens Rounds comes with an image of two aliens inside Area 51. These aliens are likely being held captive at the highly secretive base known only as Area 51. This base is the home to some of the latest advancements in military weapons in the United States’ arsenal are developed. Others believe it is still home to aliens, or at least alien bodies.

On the reverse side of 1 oz Copper They’re Here Aliens Rounds is a depiction of a common design element for rounds from this mint. The field has a floral background with a set of eagle’s wings supporting a US national shield and a rendition of the American flag above.