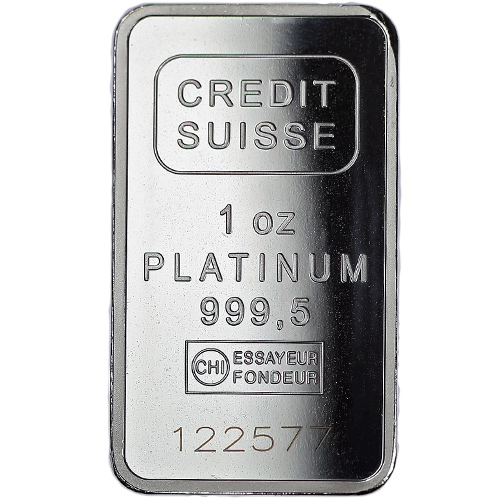 Any quantity available for $99.99 per bar over spot!

One of the rarer elements naturally occurring in the Earth’s crust, platinum has enjoyed a renaissance in recent years amid higher prices and greater demand for the metal in both precious metal products and various industries. Today, the 1 oz Platinum Credit Suisse Bar is available with Assay card online at Silver.com.

Platinum is one of the least reactive metals in the world, making it highly resistant to corrosion. It is a popular metal used in a variety of industries, chief among them the automotive industry. Catalytic converters in automobiles convert potentially harmful output gases from internal combustion engines to minimize the impact of cars on the environment.

South Africa currently produces most of the world’s platinum, with roughly 80% of production coming from native deposits within the country. Platinum can also be found in some nickel and copper ores.

On the obverse of these 1 oz Platinum Credit Suisse Bars you’ll find the image of the Credit Suisse name and logo in its trademark rectangle at the top of the bar. This is followed by the weight, purity, and metal content of the bar engraved in the center, with additional markings of the assayer’s stamp and the individual serial number.

The use of platinum in precious metal products has seen sharp increases and decreases in the 21st century. At the start of the century the price of platinum sunk so far that many producers and refiners exited the industry, leaving investors with little to no options for platinum bars or coins.

With rising prices and demand for platinum from other industries in the mid-2000s, platinum’s popularity increased. Brands such as Credit Suisse, PAMP Suisse, and the Royal Canadian Mint hopped back into the market for platinum products.

Credit Suisse was founded in Zurich, Switzerland in 1856, making it the nation’s oldest financial institution. Originally formed out of a need to provide lending and financing to the growth of the nation’s railway system, Credit Suisse also financed major projects such as the nation’s power grid. Today, Credit Suisse is a global brand with offices around the world, including in the United States.

Please don’t hesitate to contact Silver.com with questions at 888-989-7223. You can also contact us online using our live chat and email features.