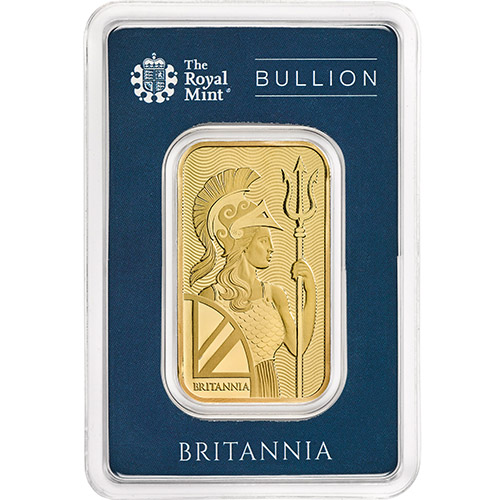 Any quantity available for $76.99 per oz over spot!

Britannia has been a symbol of Britons and the British Isles since the 1st century AD when the Roman Empire expanded northward off the European continent and sought to bring Britain into the fold of its empire. Britianna remains today as an enduring symbol of the nation’s strength and vigilance much in the same way Americans view Lady Liberty. The 1 oz Gold British Britannia Bar is currently available to you for purchase online at Silver.com.

The new 1 oz Gold British Britannia Bar from the Royal Mint marks the first use of her likeness on a gold bullion bar. The vision of Britannia featured on the obverse was created for this program by Jody Clark, the man who created not only the modern fifth-generation effigy of Queen Elizabeth II for British coinage, but also the designs of the heraldic beasts in the Queen’s Beast Series of bullion coins.

Britannia first appeared in British and world culture during the Roman occupation of the British Isles as the Latin-language term the Romans used to define the new province of Britain translated into Celtic (and later English) language as Britannia. Today, most know her as a symbol of Britain’s seafaring might of the past five centuries and its vigilant protection of the home isles.

On the reverse side of the 1 oz Gold British Britannia Bar is the seal of the Royal Mint of England at the top. Below it are engravings of the weight, purity, and metal content of the bar, along with a unique serial number composed of two letters and six numbers, with each bar starting with an “RM” for Royal Mint.

The obverse face of the 1 oz Gold British Britannia Bar features the likeness of Britannia in right-profile relief. Her features and figure are classical in design. She wields her trident in one hand and holds a shield, partially visible in the lower-left corner, with the Union Jack flag on it.

These Gold British Britannia bars are available to you inside of tamper-evident packages. Each individual bar comes with an Assay card to verify the matching serial number from the Assay and the bar’s surface.