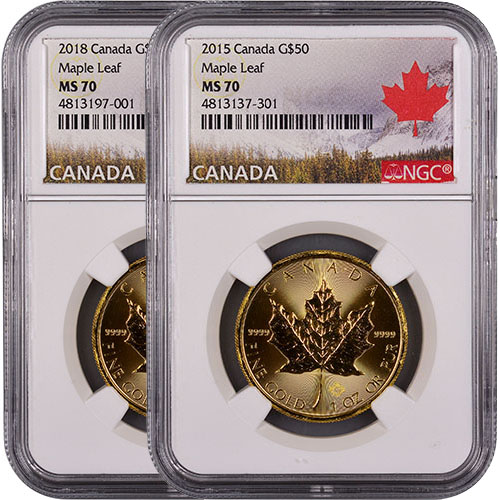 The Gold Canadian Maple Leaf Coin was released by the Royal Canadian Mint to compete with the Gold South African Krugerrand in 1979. The coin was originally available only in 1 oz gold and was offered with just .999 fine gold content. This continued through November 1982, at which point the RCM boosted the coin’s gold content to .9999 fine gold to make it the first gold bullion coin of its kind with 24-karat gold content.

All 1 oz Gold Canadian Maple Leaf Coins available to you here today come with a Mint State 70 certification from the NGC. Coins in MS70 condition have full, original mint luster and lack any type of detracting flaws on the surface areas or design elements of the coin.

This Silver.com listing offers the Gold Canadian Maple Leaf with varied labels possibly featured within the protective plastic slab. The most common labels for bullion coins are Early Release and First Day of Issue. These labels indicate the timing of the coin’s arrival for grading, with the latter indicating that the coins were received within the first 24 hours of their initial release date from the Royal Canadian Mint.

On the obverse of all 1 oz Gold Canadian Maple Leaf Coins is the effigy of Queen Elizabeth II. Her Majesty is featured in right-profile relief on the obverse of all Canadian coins dating back to 1953 when she officially ascended the throne of England. These coins could feature one of three different designs. These include the second-generation design (1979-1989), Dora de Pedery-Hunt’s design (1990-2002), or Susanna Blunt’s design (2003-present).

Please don’t hesitate to ask questions of Silver.com customer service. You can call us at 888-989-7223, chat with us live online, or email us directly.