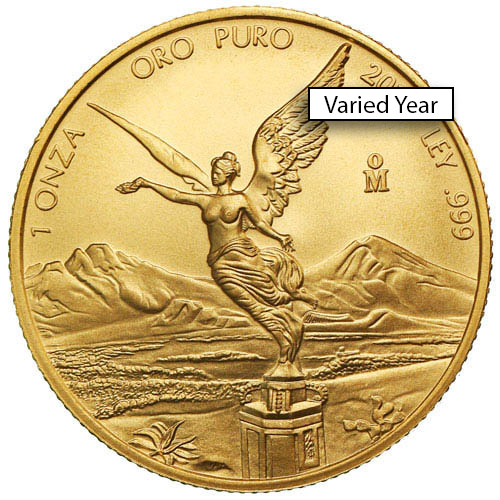 When the Centenario was introduced by the Mexican Mint in 1921, the nation was celebrating 100 years of freedom from Spanish rule with a beautiful set of obverse and reverse designs for circulation gold coinage. Today, that imagery lives on as the official bullion coin design for Mexico’s silver and gold coin series. 1 oz Gold Mexican Libertad Coins are available to you today online at Silver.com.

The 1 oz Gold Libertad is unique within the Libertad series for its reverse design. While the fractional-weight gold coins feature only the modern-day coat of arms for Mexico, the 1 oz gold coin has the space to feature all 10 of the historic depictions the nation has used for this seal dating back to the 1820s when it began its fight for independence from Spain.

Today, in this Silver.com listing you can purchase a 1 oz Gold Mexican Libertad Coin from varied years of issue. The coins in this listing will feature year of issue marks including 1981, 1991-1994, 2000, or 2002-present. Silver.com cannot guarantee you a specific year of issue or take requests. Your order is fulfilled based upon our processing time for each order, and filled with a coin based upon availability when your order is packaged for shipment.

On the obverse of all 1 oz Gold Mexican Libertad Coins is the image of Winged Victoria in the foreground. She was a symbol of resistance and freedom to the Mexican people during their war with Spain. The background includes two massive volcanoes visible from Mexico City. Named Popocatepetl and Iztaccihuatl, each is based upon a pair of ancient Aztec lovers whose story is part of the local lore.

The reverse of the Gold Mexican Libertad in this weight features the modern coat of arms for Mexico in the center of the design field. Immediately surrounding it are engravings of a wreath and the nation’s full name in Spanish, while the outer design area has 10 historic versions of the seal used since the 19th century.

Located in Mexico City, the Mexican Mint was founded back in 1535 by Spanish conquistadors. Among its original duties was the refining of silver and gold for shipment back to Europe, as well as the coining of Spanish colonial currency for New World colonies in the empire. Today it is controlled by Banco de Mexico and produces Mexican currency, as well as banknotes.

Please don’t hesitate to contact Silver.com with questions. You can reach out to our team at 888-989-7223, chat with us live online, or simply send us an email with your inquiries. You can also use our website to find gold and silver prices today!