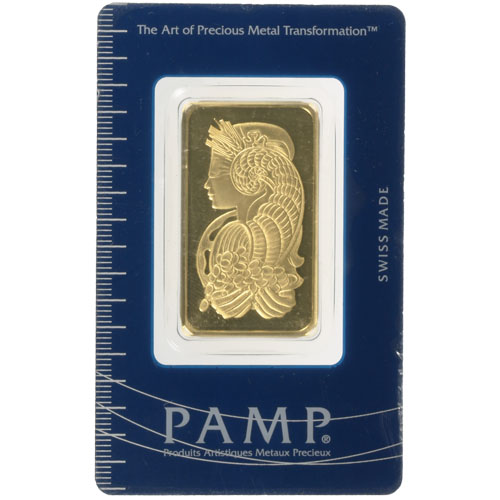 Fortuna was one of the most popular Roman deities and one of the few to remain a part of popular culture through the Middle Ages and into the Renaissance period in Europe. Her longevity in the minds of mankind is due in large part to the author Boethius of the Later Antiquities era.

On the obverse of 1 oz Gold PAMP Suisse Fortuna Bars is a left-profile bust of Fortuna. This design was the first intricate image placed on a bullion bar and led a revolution in gold bullion bar design. Fortuna wears a veil in this depiction symbolizing the fact that good luck is blind and happens by chance. She wears the horn of plenty on her head that spills riches out at the bottom into her awaiting hands.

The reverse of Gold PAMP Suisse Fortuna Bars comes with the PAMP Suisse logo at the top and follow-up inscriptions listed vertically down the surface of the bar. Included in the design are the weight, metal content, and purity of the product.

Secondary market is a term that is used to identify the source of the bars. The gold bars from the PAMP Suisse Fortuna range in this listing do not come directly from the original mint, but rather from a secondary source. Nonetheless, the bars remain in good condition and have the original packaging available.

These 1 oz Gold PAMP Suisse Fortuna Bars are available with a protective assay card package that includes authentication information such as the weight, purity, metal content, serial number, and assayer’s signature on the card.

Silver.com encourages customers to give us a call with questions at 888-989-7223. You can also connect to us on the web through our live chat and email address.