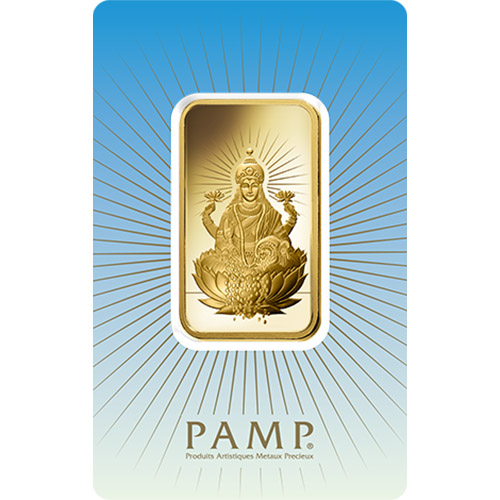 The Religious Series of minted ingots from PAMP Suisse celebrate the symbols of the world’s major religions. Based on the percentage of humans in the world, Hinduism is practiced the third-largest amount of the global population at roughly 15.4%. This puts it behind only Christianity and Islam, each claiming more than one-quarter of the world’s population as followers. Today, 1 oz Gold PAMP Suisse Lakshmi Bars are available to you online at Silver.com.

All of the 1 oz Gold PAMP Suisse Lakshmi Bars available in this listing at Silver.com are in brand-new condition from PAMP Suisse. The bars are available with individual blistercards that include, as a part of the design, a capsule for the bar and an assay certificate. The assay offers authentication of the weight, purity, and metal content. There is also a matching serial number and the signature of a certified assayer.

On the obverse side of the 1 oz Gold PAMP Suisse Lakshmi Bars is a portrait of the goddess Lakshmi. The goddess is associated with wealth, fortune, and prosperity, as well as fertility, luxury, and joy. She is often depicted with a crown top and flowers in two of her hands, while her other two hands are often shown with different design elements. In the case of this design, she is shown in a seated position with flowers in each of her upper hands, and coins flowing from her lower hands.

The reverse face of 1 oz Gold Lakshmi Bars comes with the PAMP Suisse logo. While the logo is the primary design element of the bar, it is not the only inscription featured on this side of the bars. This face of the bar also has inscriptions of the weight, purity, and metal content of the bar. The assayer’s mark is on this side along with a unique serial number.

Please don’t hesitate to reach out to Silver.com with any questions. You can call us on the phone at 888-989-7223, chat with us on the web, or send us an email with your inquiries.